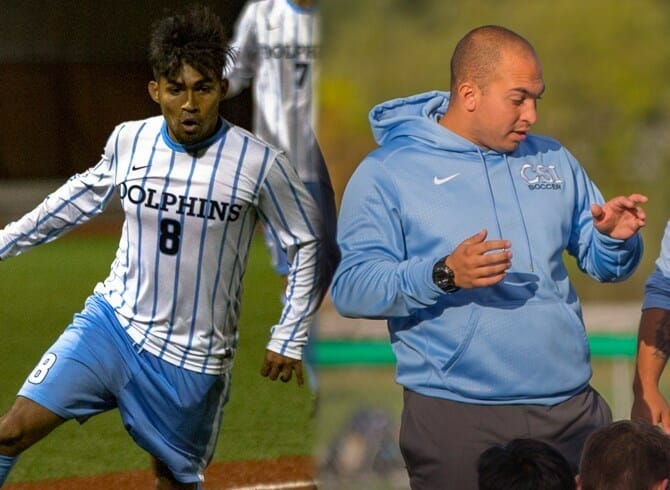 The College of Staten Island Men’s Soccer unit enjoyed a successful run this season, and the team is still basking in the highlights, earning three major ECAC Metro NY/NJ year-end citations.  Freshman midfielder Brayan Evo was named the conference’s Rookie of the Year, while Head Coach John Tardy garnered Coach of the Year honors.  Junior defender Ruben Diaz, the CUNYAC Defensive Player of the Year, was named to the ECAC Metro NY/NJ 2nd-Team of All-Stars.

Evo was a catalyst all season for the Dolphins, and enjoyed a stellar initial campaign.  He led the Dolphins with 64 shots taken this season and posted second on the squad in both goals with seven, and assists with six.  Like the ECAC honor, Evo was the CUNYAC Rookie of the Year.  He posted a game-winner this season, and played in all 20 contests this season.

“Right from day one, Brayan had an immediate impact,’ said Tardy of his freshman star.  “His work rate is unmatched, and his creativity on the ball is something we haven’t seen here.  To have three more years with him improving is going to mean big things for us in the future.”

Tardy, meanwhile, took top coaching honors in the ECAC Metro NY/NJ division following a 10-9-1 season that saw his team take its second-straight CUNYAC Regular Season title.  The Dolphins started the season 0-6, but rebounded with a fantastic finish that saw them advance to the CUNYAC Final.  Two of CSI’s final three losses came in overtime, and Tardy’s very young unit saw four of CSI’s top five scorers playing in their inaugural year, a testament to fine recruiting.

“I am honored and I think it’s great that we are being recognized for taking steps in the right direction,”  said Tardy.  “I still feel we have a lot more to do.  I think based on the foundation we have laid and the support we are given, we are looking forward to doing a lot better.”

Following up on Evo and Tardy’s success comes Diaz as a second-team all-star.  Diaz was a stalwart on the back line, starting 17 games in which he appeared.  When lending himself to the rush up field, Diaz popped in two goals on 12 shots, but it was his tenacity and physicality on the center of the defensive backfield that anchored the unit in 2015.