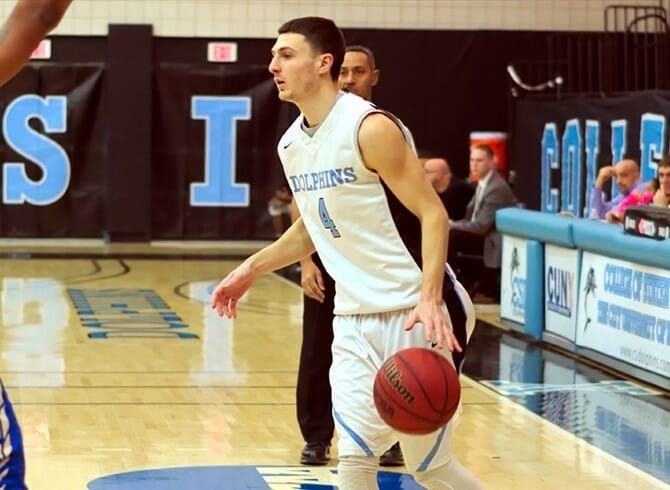 College of Staten Island men’s basketball senior Frank Schettino enjoyed a huge week last week as the Dolphins celebrated an undefeated week that was, and for his efforts the guard has earned both a CUNYAC and a Metropolitan Basketball Writers Association Player of the Week honor.  The CUNYAC citation is Schettino’s second of the year, while the Met Writers award is the first of his career, and encompasses all 74 Division II & III basketball programs in the metro area.

Schettino left little to doubt last week.  Against Baruch College in a battle of the CUNYAC’s two undefeated teams, Schettino logged 38 minutes, banking 21 points to go with 13 assists, tying the second-highest total in CSI single game history.  He also came two rebounds short of a triple-double with eight rebounds, and the senior added four steals as well, as the Dolphins prevailed 77-68.

Just about 48 hours later, Schettino would follow up with a historic performance in Brooklyn against Medgar Evers College.  In a 99-72 win, Schettino logged just 31 minutes, but still proceeded to whip up 18 points and 12 rebounds, but the distributor west off for 17 assists, a new CSI single game record.  When the dust settled, Schettino had banked only the fifth triple-double by a Division III basketball player this season.

For the week, Schettino averaged a triple-dip, with 19.5 points, 10 rebounds, and 15 helpers, adding seven total steals to boot.  The senior is now averaging 16.1 points to go with 5.9 rebounds per game, along with team highs with 120 assists and 42 steals.

The Dolphins are now 7-0 in CUNYAC play, and will put it on the line against Hunter College on Wednesday evening on the road at 7pm, before returning home on Saturday to play defending CUNYAC-Champion Brooklyn College at 3pm.