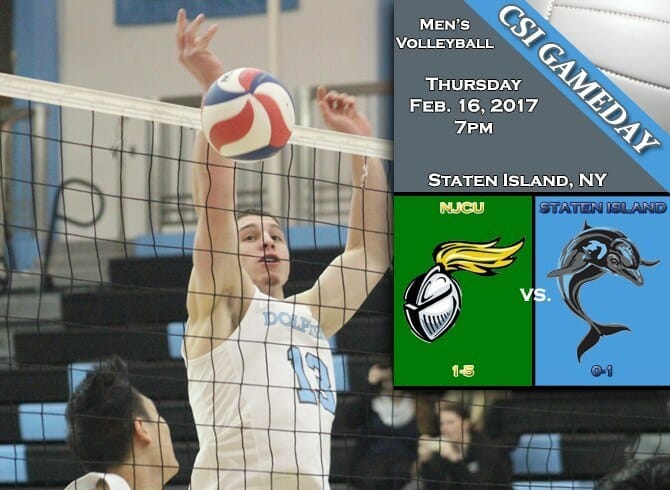 The College of Staten Island men’s volleyball program will look to bounce back tonight from their opening season loss when they take on, their neighbors from across the Bayonne Bridge, New Jersey City University.  The Dolphins will host the Gothic Knights at the CSI Sports & Recreation Center and look to pick up their first win against the Gothic Knights during tonight’s match at 7:00 pm.

CSI vs NEW JERSEY CITY UNIVERSITY AT-A-GLANCE
Matchup: CSI (0-1 Overall, 0-0 CUNYAC) vs. NJCU (1-5 overall, 0-0 Skyline)
Where: CSI Sports & Recreation Center – 2800 Victory Blvd. – Staten Island, NY
Tip-off: 7:00 pm
Live Stats: http://www.sidearmstats.com/csi/mvball/
Live Video:  http://www.csidolphins.com/csisportsnet
All-Time Series: NJCU leads 2-0
Players To Watch (CSI):  Mark Palencia shined in the opening match of the season, collecting 9 kills while hitting .200 against a nationally ranked Lasers. Danil Kukovitskiy was a force to be reckoned with at the net as he was able to secure three solo blocks in the loss.  Kukovitskiy was second on the squad with four kills last match after finishing last season in third with a total of 92 kills. Brandon Lei will make his first start for the Dolphins this season after missing the season opener and will resume setting duties, a role he played well last season where he collected a total of 468 assists.
Players To Watch (NJCU): Julian Moreira leads the way for the Knights with 58 kills on the year while Jimmy Vega has been distributing the ball well, tallying 172 assists through six matches.  At the net, the Dolphins will have to contend with Moreira and Jonathan Andrew who each have collected 13 blocks this season.
News & Notes: The Gothic Knights are having a down year, starting just 1-5 without a win on the road this season.  The Gothic Knights do however, own the series over the Dolphins 2-0 without dropping a single set. Despite the loss in their opening match the Dolphins improved every set and hope that that improvement will carry over to tonight’s match against NJCU.  Staten Island finished last season 8-20 and will look to improve upon that mark this season, starting with a win tonight and preventing NJCU from picking up their first road win of the year.