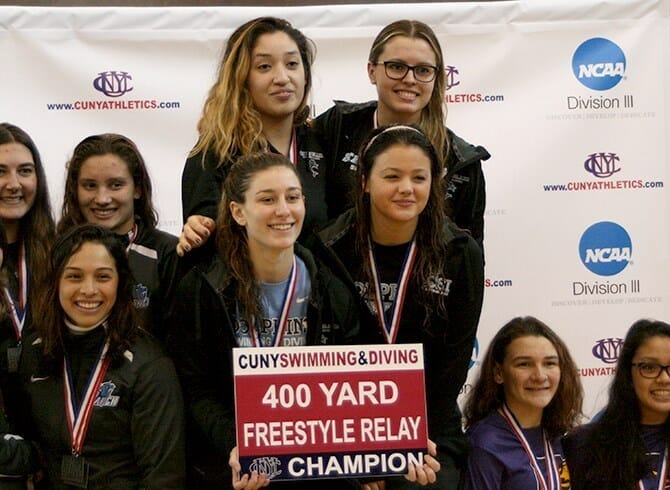 The Championship’s final day featured the final six events of the meet, culminating in the awards ceremony that saw the Dolphins place third with a total of 360 points.  Hunter College won the meet overall with 599 points, while Baruch College placed second with 497 markers.  CSI scored ahead of Lehman (239), Brooklyn (179), John Jay (91), and York (16).

The meet started with the 1,650-yard Freestyle, and after two heats, CSi scored with Naomi Gaggi claiming fourth place while Olivia Brown secured a 9th place finish.  The Dolphins then earned a medal in their next event, the 200-yard Backstroke.  Samantha Escobedo earned silver with a run of 2:25.68 in the field of 16 racers.

The Dolphins kept the momentum going in the 100-yard Freestyle.  There, Ewa Wojciechowska was tops among 37 in the field with a time of 55.53.  Coming in hot behind her was teammate Victoria Crea, who clocked in at 57.83, good for third place in the field.

CSI did not compete in the Breaststroke and Butterfly events that followed, so the team finalized with the 400-yard Freestyle Relay.  In the heated event, the Dolphins came from behind to score a first-place finish with a two-plus second win over Baruch’s quartet.  Gaggi, Escobedo, Crea, and Wojciechowska did the honors there.

For the Dolphins it capped a very successful run through the championship, one that saw the Dolphins claim a total of 16 Top Three finishes, including eight gold, four silver and four bronze medals.  To add to the laurels, Gaggi was named the conference’s top Sportsmanship Award winner, it was announced at the awards ceremony.

Next up for the Dolphins will be the Metropolitan Swimming and Diving Championships at Rutgers University in two weekends, continuing the postseason run.