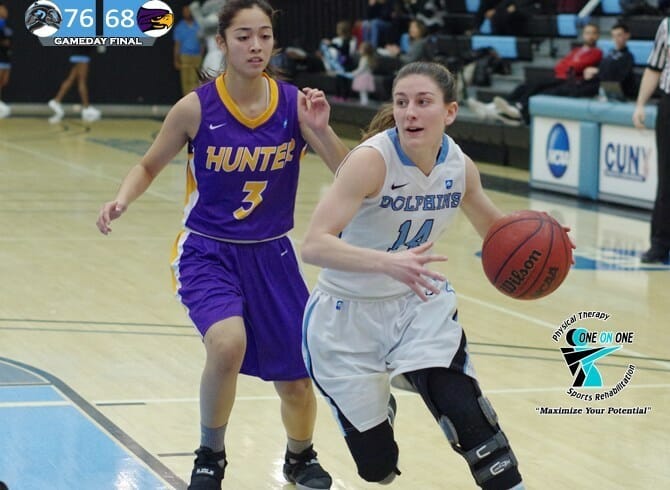 The College of Staten Island women’s basketball team picked up their 11th straight win tonight to improve to 19-4 overall and 13-1 in the CUNYAC.  The Dolphins defeated the Hawks of Hunter College 76-68 at the CSI Sports & Recreation Center, which improved their home record to 9-2 on the year.

Christina Pasaturo’s streak continues her 20-plus point streak as she poured in a game-high 24 points to extend the streak to 18.  Samantha Flecker had an outstanding game, collecting her sixth double-double of the season with 18 points and 16 rebounds in the win.  Victoria Crea was a nightmare for the Hawks as she used her speed to carve up the defense and find her way to the hoop.  When the defense would collapse on her she found open teammates which gave her a game-high seven assists.

The Dolphins got off to a sluggish start this afternoon and only scored 16 points in the first quarter which is normally their most productive as they have outscored opponents 488-299 in the first quarter alone this season.  Despite the slow start, Staten Island was able to maintain for a majority of the half once Angelique Price converted a layup on a pass from Pasaturo.  Rosa Perone was able to get in on the interior action as well. Perone pulled down and offensive rebound and put it back up for her lone basket of the game.

Crea extended the Dolphins’ lead to double digits when she once again flew through the lane for an easy layup to put the Dolphins up 28-18.  The Hawks would continue to peck away at the lead and get it down to six as Theresa Leung, and Jade Aponte both made baskets. Pasaturo began to get in her groove as the Hawks began to cool off and would score four straight points for the Dolphins to put them up 13 points over the Hawks.  CSI was able to find success in the paint in the first half as they edged out Hunter 22-10.

The third quarter the Dolphins caught fire and hit back-to-back three’s by Flecker and Pasaturo to push the Dolphins up 52-36 over the visitors. Down by 16 the Hawks knew they had a large mountain to climb and they were able to do just that as they headed into the final stanza down just eight points.

Three minutes into the fourth quarter the Hawks flew on a 7-0 run to shrink the lead down to just one.  After having such a large lead the Dolphins needed to find themselves again as the Hawks began to match everything they did. The Dolphins were finding their way to the free-throw line as the time dwindled down to keep their lead intact.  The Hawks’ rally would eventually fall flat as they would hit a cold spell which allowed the Dolphins to go on an 8-2 run to seal the game.

Staten Island has two games left on their schedule which happen to be the two teams sitting right behind them in the standings.  The Dolphins will have a tough final two games as they hope to remain atop the standings to secure the first round bye into the CUNYAC Tournament.