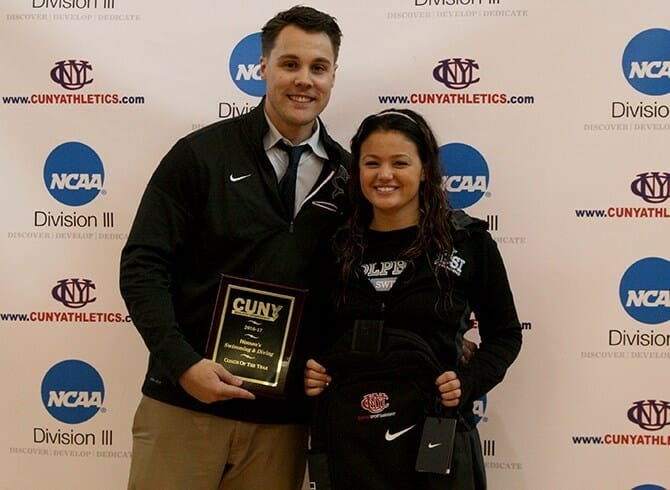 The College of Staten Island women’s swimming and diving team celebrated another solid CUNYAC campaign this season, and fresh off of their third-place finish at the annual Championship Meet, the Dolphins boast a total of six postseason honors bestowed to them by the conference.  Head Coach Michael Ackalitis took Coach of the Year honors while senior Naomi Gaggi not only was named an all-star, but also the CUNYAC Sportsmanship Performer of the Year.

The Dolphins finished with a 5-6 overall record this year, finishing 4-2 within the CUNYAC and their improvement at the top and after a great championship performance net Ackalitis his victory with Coach of the Year honors.  He won the same award on the men’s side as well.

The CUNYAC Scholar-Athlete of the Month for December, Gaggi was named Sportsmanship Player of the Year, thanks to her impeccable performances and her commitment to community service and research initiatives as a high-achieving scholar on the CSI campus. The standout was also second on the team with 429 total points this season and 21 top three finishes in individual events this year.

Junior Ewa Wojciechowska also earned all-star status for the third year in a row.  Wojciechowska was named the Co-Most Valuable Performer at the CUNYAC Championship as she swept her individual events while leading CSI with 527 season points.  She also led CSI with 20 gold medal performances in individual events this season and was second overall with 19 top three relay finishes.

Three others earned on as all-stars for CSI.  Samantha Escobedo was next in line.  She tallied 361 total points for CSI, good for third on the team and was tied for third with fellow all-star Alicia Defonte with 17 top three finishes in individual events.  Defonte led all CSI swimmers with 21 top three placings in relay events.  Victoria Crea, a two-sport star who doubles on the basketball team finished with 301 points this season and posted six first-place finishes in individual events good for fifth on the team.  Her 9 gold place finishes in relay events was tied for second on the team.

Rounding out the list of all-stars was diver Nouran Abualam, who swept the 1M and 3M championships at this years CUNYAC Championship Meet.  Abualam was seventh on the team with 167 total points and was second on the team overall with 11 first place finishes, all on the diving boards this season.

Lehman College’s Angelica Mejia was named the conference’s Player of the Year, while Hunter’s Sera Knobler was named the CUNYAC top rookie.