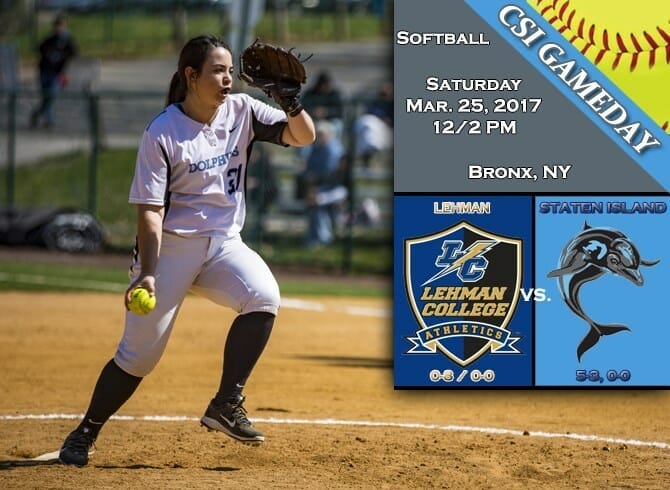 The CSI Softball team will head out to Bronx, NY, for their first conference doubleheader against the Lehman Lightning, starting at Noon. The Dolphins will be glad to finally get back on the diamond for the first time since their last game in Florida on March 12.  They will take on CUNYAC opponents Lehman College and will look to extend their win streak to three in a row.

CSI vs LEHMAN COLLEGE AT-A-GLANCE
Matchup: CSI (5-3 Overall, 0-0 CUNYAC) vs. Lehman College (0-8 overall, 0-0 CUNYAC)
Where: Bronx, NY
First pitch: 12:00 pm
All-Time Series: CSI leads 54-12
Live Stats: http://www.sidearmstats.com/lehman/softball/
Players To Watch (CSI): Former Rookie of the Week, Patricia Riches, continues to make her mark on the Dolphins team as she is nationally ranked with a .600 batting average (15-25) with five runs, three doubles, and four RBIs. Veteran Vanessa Jioia is second on the team with a .435 batting average (10-23) with two doubles and a team-high 7 RBI. Senior pitcher Jacqueline Cautela (3-0), like her teammate Riches, is also nationally ranked with a .029 ERA.
Players To Watch (LC): Maranda Diaz paces the way for the Lightening with a .250 batting average (3-12) with five runs, two triples, two RBI and nine walks. Linda Resto and Andrelina Gil are tied with .200 batting average (3-15). Pitcher Hailey Davila is 0-1 this season with a 7.53 ERA.
News & Notes: Over the past year’s meetings between the Dolphins and the Lightening, Staten Island is on five-game shut-out streak starting in 2014 in a 11-0 double-header win. Staten Island’s pitching will be vital part for the Dolphins defense as they are ranked 43rd in the nation with a 1.81 ERA in 8 games. The Dolphins are looking to clinch their first win since Florida, despite the cold weather. The Dolphins fared well in Florida at the Citrus Games at the ESPN Wide World of Sports Complex, taking down Thiel College and the University of Rochester, with the latter receiving votes into the Top-25.  Staten Island will start their CUNYAC title defense today en-route to what they hope will be their fifth straight CUNYAC title.