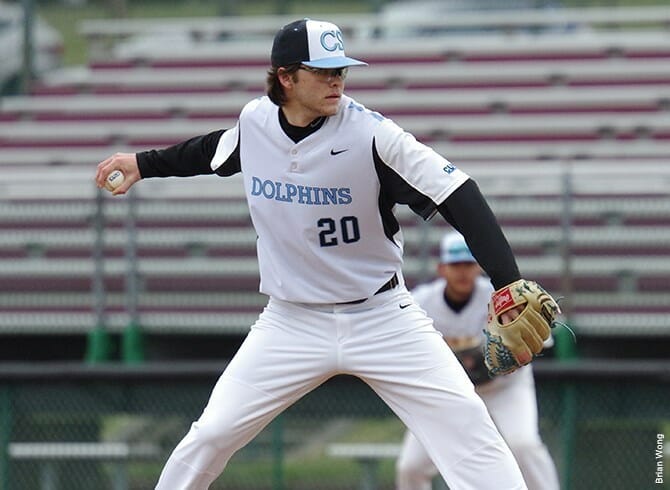 After an eventful weekend filled with four games in three days, the College of Staten Island baseball team collected a pair of honors from the CUNYAC, it was announced today.  Senior Ryan Kennedy took home the conference’s Pitcher of the Week, while Nick Meola bagged his second Rookie of the Week honor of his young career.

A senior who boasts 9 career wins a 4.18 career ERA, Kennedy is the last remaining Dolphins pitcher who has not allowed an earned run yet this season, having recently capped his second start of the 2017 campaign.  Kennedy was actually a hard-luck losing pitcher in yesterday’s 2-1 defeat against Manhattanville.  The hurler threw 5.2 innings, surrendering two unearned runs against just four hits.  He fanned three batters while walking only one.  For the season, Kennedy is 1-1 with a 0.00 ERA, surrendering just seven hits in 12.2 innings of work, walking two while fanning 12.

Meola has had an exciting start to his career at the College.  The Xaverian High School star hit safely in three of four games played this week, including multi-hit games against Kean (2-4) and Manhattanville (3-4).  The freshman went 6-15 overall at the dish with  double and his first career homerun in the loss to Kean University on Friday.  He also posted four RBI and a pair of runs scored.  For the season, Meola is batting .371, and is tied for second on teh squad with seven RBI, adding five extra-base hits.

The Dolphins are set to get back to action tomorrow, when they host William Paterson University at the CSI Baseball Complex at 4pm for a single, 9-inning, contest.