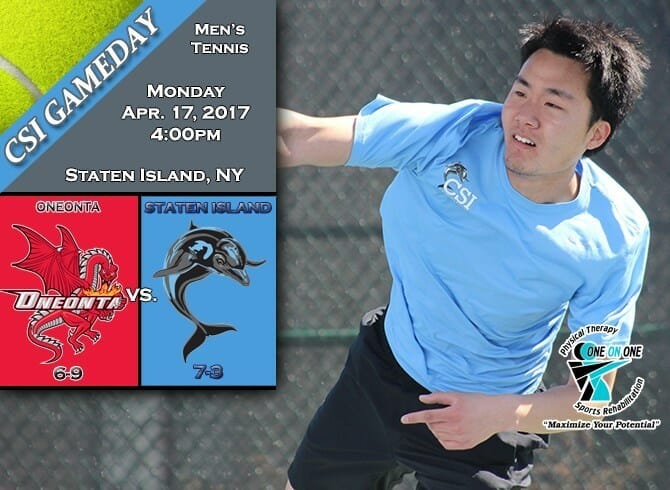 The College of Staten Island men’s tennis team has been on a roll as of late, winning six straight to improve to 7-3 on the year. The Dolphins will host the Red Dragons of Oneonta this afternoon at 4:00 pm at the CSI Tennis Complex.

CSI vs ONEONTA AT-A-GLANCE
Matchup: CSI (7-3 overall 4-1 CUNYAC) vs. Oneonta (6-9 overall)
Where: CSI Tennis Complex – 2800 Victory Blvd., Staten Island, NY
First Serve: 4:00 pm
Players To Watch (CSI):  Akaki Dundua has performed well in his rookie campaign at Staten Island and boasts a 5-2 overall record with three of his wins coming from the number five court. Tao Lin is 7-2 in doubles play this year and will certainly look to improve that mark this afternoon against the Red Dragons.
Players To Watch (ONE): Michael Nelson will play in the one spot for the Red Dragons.  Nelson is 3-9 on the year from court one while recording a 7-11 record in doubles play.  Zach Lasky will clash with Dundua on court five as he has found success and boasts an 8-5 record.
News & Notes: The Dolphins are riding a six-match win streak but have struggled on their home courts this season, recording just a 2-2 record. The Red Dragons also come in trending upward as they have won their last two matches.