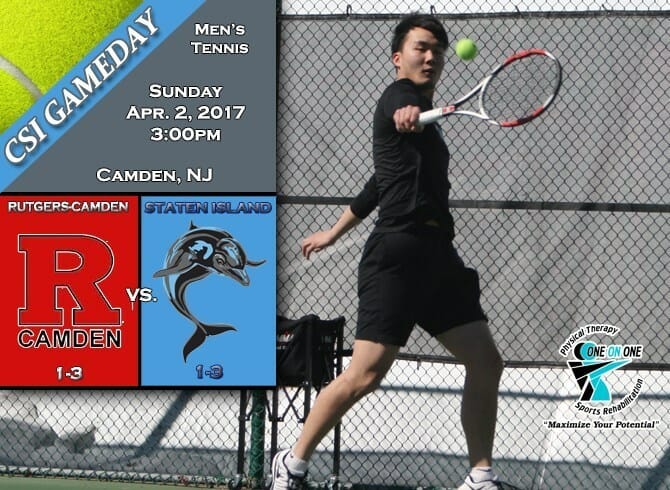 The College of Staten Island men’s tennis team takes to the road this afternoon to take on the Raptors of Rutgers-Camden at 3:00 pm for a non-conference match. The men will look to rebound from a tough loss against CUNYAC rivals Hunter College with a win here this afternoon.

CSI vs RUTGERS-CAMDEN AT-A-GLANCE
Matchup: CSI (1-3 Overall, 0-1 CUNYAC) vs. Rutgers-Camden (1-3 overall, 0-0 NEAC)
Where: Rutgers-Camden – 303 Cooper St – Camden, NJ
First Serve: 3:00 pm
Last Meeting: April 25, 2016 – Camden won 7-2
Players To Watch (CSI):  Andrew Adia will lead the way for the Dolphins on court one as he is coming off of a CUNYAC All-Star week.  Alex Tsui will hope to keep his undefeated record on court four alive this afternoon as he is the only Dolphin to have success on that court this season.
Players To Watch (RUC): Anthony Gendin has struggled from the one spot this season and is just 1-3.  The Raptors have much success on court four as Jason Mehta boasts a 3-1 record and is currently on a one-match win streak.
News & Notes: CSI will look to avenge their loss against the Raptors from last season as well as break their losing skid to find their way back into the win column. When playing away from home this season the Dolphins boast a 1-1 record while they are 0-2 at home.