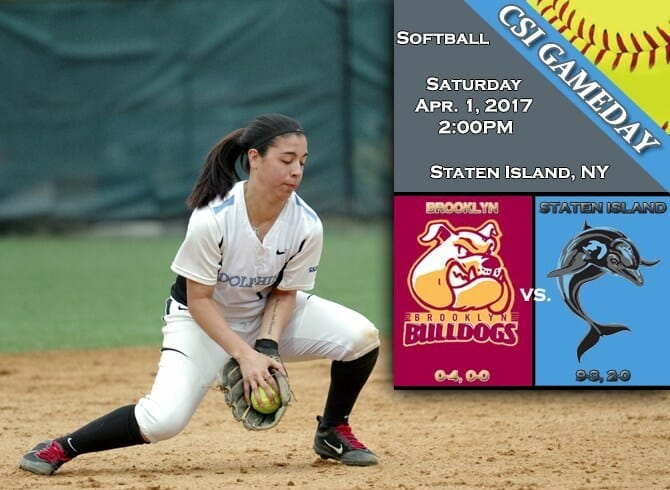 The CSI Softball team is coming off a sweep of Stockton University which extended their win streak to five in a row.  The Dolphins will host CUNYAC opponents Brooklyn College this afternoon in a doubleheader starting at 2:00 pm.

CSI vs BROOKLYN COLLEGE AT-A-GLANCE
Matchup: CSI (9-3 Overall, 2-0 CUNYAC) vs. Brookyln College (0-4 overall, 0-0 CUNYAC)
Where: CSI Softball Complex – 2800 Victory Blvd – Staten Island, NY
First Pitch: 2:00 pm
All-Time Series: CSI leads 47-11
Live Stats:  www.sidearmstats.com/csi/softball
Live Video: www.csidolphins.com/csisportsnet
Players To Watch (CSI): Vanessa Jioia sits second on the team with a .448 batting average (13-29), two doubles, one homerun, and eight RBI. Jioia leads the team in base on balls with six. Newcomer, Alison Meagher, is second in pitching (1-1) with 1.37 ERA in 15.1 innings and Nicolette Trapani is third with 2.04 ERA with a team-high of 20 strikeouts.
Players To Watch (BC): Brooklyn only playing two games so far due to weather start off on a two-game losing streak. Shakira Feliciano leads the way for the Bulldogs with a .667 batting average (4-6) with one double, one homerun and two RBI in two games. Breanna Maresca is next with a solid .600 batting average (3-5) and three doubles. Both Brooklyn pitchers are 0-1 to start off. Uena Xharo has a 16.00 ERA with a high of five strikeouts.
News & Notes: The Dolphins are riding a five-game win streak overall this season and are currently on an 11-game win streak against Brooklyn College which goes back to the 2012 season.  Brooklyn defeated Staten Island 5-4 which ended a 27-game win streak the Dolphins had over the Bulldogs.  Over their last 11 games against Brooklyn College, the Dolphins average 10 runs a game while hold the Bulldogs to less than a run a game.