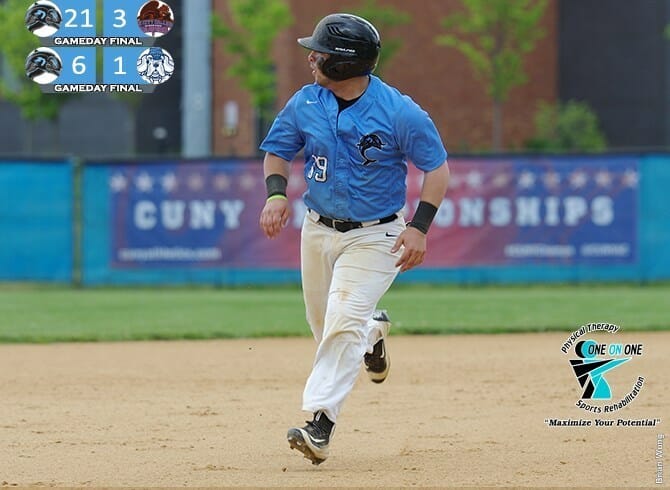 POSTGAME INTERVIEWS | The College of Staten Island baseball team faced elimination on Saturday in the 2017 CUNYAC Postseason Tournament, but the Dolphins stayed alive and punched their ticket to another Championship appearance tomorrow thanks to a pair of wins this afternoon at the CSI Baseball Complex.  In the opening game of the set today, CSI defeated No. 3 City College of New York by a whopping 21-3 score, and then after No. 2 Baruch College defeated No. 4 John Jay College in the winner’s bracket game, CSI turned around and defeated John Jay by a 6-1 count to emerge from the loser’s bracket to face Baruch tomorrow.

GAME ONE
The Dolphins set a new program record with a 21-run breakout performance against CCNY in a game where they fell behind early but then took the lead and never looked back.

Before the Dolphins took their first hacks they fell behind 2-0 as CSI starter Derek Jentz started by plunking Cooper York and he was promptly plated by a Adrian Pena double.  Stephen Peters then singled in Pena for the damage.  The Dolphins went down without a response in the first but as Jentz settled in the second, so too did the Dolphins bats as they would score in every inning after the first to eventually cruise.

First, in the second frame, The Dolphins would score Frank Muzzio on a double play and then Jordan Wilson tallied an RBI hit to knot the score.  In the third, still off of CCNY starter Joe Bystrik, CSI tallied another pair, this time when Glenn Glennerster ripped a two-RBI single to score Anthony DiMarco and Nick Meola.  In the fourth, Frank Sconzo plated Bobby Drake to make it 5-2, and then he came in on a DiMarco double, and then Meola doubled him in to make it 7-2.  CSI made it an even 10-0 after five innings when they put up three in the fifth, highlighted by Wilson and Sconzo hits to score in runs off of CCNY reliever Jeffrey Diaz.

In the sixth, CSI plated seven, sending 10 batters to the plate.  DiMarco powered in a two-RBI single, as did Muzzio.  Right in the middle of the frame, Sconzo drew a walk, his 35th of the season, a new CSI single season record.

In the eighth, CSI caught the program record for runs in a CUNYAC playoff game when they plated three more runs helped by a single hit and a Beavers error.  The runs broke the former record of 18 runs scored against Baruch College way back in 1985 in an 18-6 semifinals win.  CSI added a single run in the eighth, negated by a Beavers run in the ninth.

GAME TWO
The win by the Dolphins earned them the chance to play again in the final game of the evening against John Jay, the same team that defeated them to send them into the loser’s bracket on Thursday, 6-4.

In an almost carbon copy of the opener, CSI got into trouble early, as starter Tom Musso yielded an early run in the first inning and CSI was down without ever swinging the bat.  Dylan Laudano did the honors for JJC with an RBI single scoring RJ Davila to make it 1-0.  Musso would strand two runners to get out of the jam only down by one.  Again CSI could not answer in the first but did in the second.  With Wilson on first, Jett Nouvertne laced an RBI-double to tie the score.

One inning later, CSI took the lead for good off of JJC starter Charlee Rodriguez.  Sconzo singled to start the third and after a DiMarco walk, Muzzio tagged a two-RBI double into the gap in right center field, making it a 3-1 game.

Musso had an uneventful fourth, then forced JJC into stranding two runners in the fifth and then again breezed in the sixth.  In the bottom half, CSI would add three more runs to seal the deal, Josh Mercado would start things off with a hit by pitch and after being moved all the way to third, he would blaze in on a wild pitch.  Later, Sconzo would single in Drake and then DiMarco doubled in Sconzo to make it 6-1, the score that would stand as the final.

After the first inning, Musso was sterling, going seven innings in the win allowing the one run on just two hits while striking out 9.  Ryan Kennedy tossed the eighth inning in relief while Jason Failla tidied it up in a non-save opportunity.  Rodriguez took the loss, going 5.2 innings allowing six runs (four earned) on eight hits, walking two and striking out one.  CSI out-hit JJC, 9-3, with Sconzo, Muzzio, and Nouvertne scoring two hits apiece.

The win sees CSI match up with Baruch for the CUNYAC Championship for the third year in a row.  CSI took two of three from Baruch this season during regular season play.  The teams will play at 12 Noon.  CSI will need to beat Baruch twice to lift the trophy, while Baruch need win just one game to take the title away from the Dolphins.