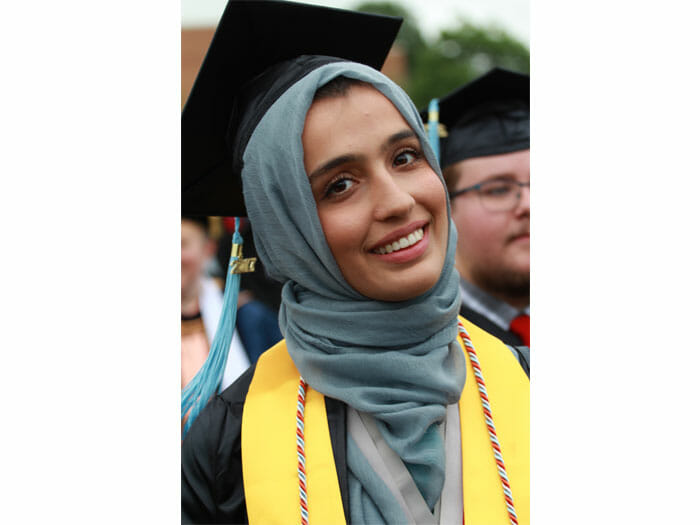 During her speech at the College of Staten Island’s (CSI) 68th Commencement, Palwasaha Syar ’17, CSI’s valedictorian of the graduating Class of 2017, quoted Nelson Mandela: “I never lose. I either win, or I learn.” Her meaningful words were in reference to the life lessons she learned during her time as a student at CSI.

Syar graduated with a Bachelor of Science in Biochemistry with plans to attend medical school.

“CSI was the place where I was accepted for who I was. … leaving it is like leaving my home… CSI has also shaped me into the strong woman that I am today,” she said, while also conveying her sentiments of challenge and triumph at CSI.

Syar shared the spotlight with several of her fellow graduates, relaying stories about their varying struggles to arrive at graduation. One student, Erin Richards, a single mother of four, while attending classes also had to manage the care of her children. Another, Andrea Dalzell, was diagnosed with Transverse Myelitis and is currently graduating from the Nursing program.

Syar further asked those in attendance to “celebrate the people around you… Learning about people’s lives and the struggles they go through will give you new perspective on your problems… Learning about others allows us to connect with them. Listening to others’ stories gives us courage and remind us that we are not alone in our struggles.”

Syar has an impressive track record of being active outside of the classroom. Along with a long list of internships, she volunteered with the CSI Emerging Leaders and also joined the CUNY Service Corps, volunteering at the Staten Island Youth Court.

“I think it is very important to get experiences outside of the classroom… since I have been blessed with so much, it is very important for me to give back. I would like to continue my service in the future, and take my medical degree to work in impoverished areas,” noted Syar, who emigrated from Pakistan to the U.S. when she was 12 years old.

Facing both social and financial challenges when she arrived, and moving several times within New York State, she found it hard to make friends. Coupling this with her challenge to master the English language, the young Syar felt “lonely and isolated.”

During her initial visits to New York City, she was in awe of her new surroundings. She noted, “the skyscrapers in the city were so high that my hat used to fall of my head when I used to look up at them.”

After her plans to attend medical school, Syar plans to continue to give back to the community. She intends to open her own medical practice in the U.S. and also volunteer in poor and underserved areas in Pakistan.

“I would like to take the skills and values I have learned here and apply them to my service in developing countries,” she commented.

Syar concluded her speech by thanking her parents, sisters, and aunt, who came from Pakistan to attend the Commencement. She also thanked the faculty and staff who supported her and her friends who made her experience at CSI so memorable.

Syar proudly exclaimed, “It has been an absolute honor standing here in front of you all giving this speech. I would like to thank you all and Congratulations, Class of 2017!”