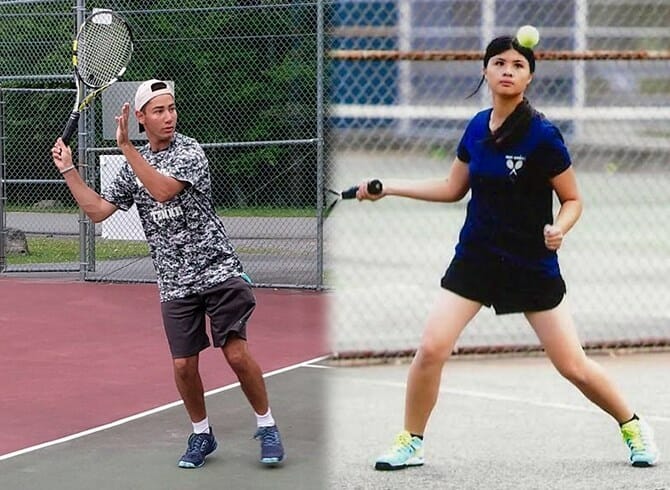 The College of Staten Island men’s and women’s tennis programs are excited to announce their 2017-18 recruiting class, with Head Coach Arthur Kapetanakis signing on three men to go along with a pair of Staten Island natives on the women’s side. The incoming freshmen will seek to push two successful programs over the top in pursuit of a CUNYAC title.

The men’s squad returns largely intact from a 10-6 campaign in 2017 that culminated in a tight semifinal loss to Hunter College. With senior Chris Pinto the lone starter to graduate, the Dolphins will look to build on their second 10-win season in three years under Kapetanakis.

David Luo, a major force in lifting his New Utrecht High School outfit to a 2014 PSAL B Division title, will make the trip over the Verrazano bridge to join the Dolphins. Luo’s 26 career singles victories, coming primarily at the number one position in a tough Brooklyn division, demonstrate the championship pedigree he brings to CSI. He will look to use his offensive firepower to find continued success at the college level.

New Dorp High School’s Matthew Kotlyar comes in fresh off a second round appearance in the PSAL A Division championships with the Cougars. Playing mostly first doubles, Kotlyar posted a career-best 7-3 record in his senior season, highlighted by a playoff win over Petrides.

Rounding out the men’s additions is Lesly DeCastro by way of Walter G. O’Connell Copiague High School in Long Island. After picking up the game as a freshman, DeCastro, quickly made his way to the top of the lineup and piled up 10 or more singles wins in each of his last three years.

“The men’s recruiting class really sets us up well for the future, as well as adding some more depth and competition for this coming season,” said Kapetanakis. “We already figured to be strong this coming year by returning so many of our top players. and these new additions will make us that much better.  The common thread with David, Matt, and Lesly is the excitement they have shown about playing college tennis, and their desire to take advantage of all CSI has to offer to take their games to the next level. I look forward to working with them to build on the strong foundations they already have.”

On the women’s side, there is more work to be done as the Dolphins graduated their top two players in Nozima Toshpulatova and Michelle Kushnir. Still, Kapetanakis expects a combination of recruits and transfers to help keep the Dolphins in contention for conference honors.

Mariah DeGuia comes to CSI via Susan Wager High School, where she excelled as a doubles player with an impressive 28-3 career record. DeGuia already has a connection to CSI, having played under former Dolphin standout Madiha Mulla, an Assistant Coach during her time at Wagner. An honor roll student, DeGuia also trains and competes in tournaments with the New York Junior Tennis League (NYJTL).

Samantha Pillarella, another NYJTL product, signs on from Curtis High School, where she compiled ten doubles wins over her three-year career. In addition to her play on the tennis team, Pillarella was a constant presence at many other Curtis athletics events was recognized for her support with a Warrior Award senior year.

“It’s great that Mariah and Samantha are already friendly from their time with the NYJTL. They both take their tennis very seriously and will have plenty of opportunities to contribute right away,”  the coach noted.

The women’s side will also be bolstered by a pair of talented transfers. Sam Maizer returns to the Dolphins after spending a year at St. Paul’s School of Nursing. In her freshman year at CSI, Maizer helped pace a 14-win squad with 20 individual wins, 10 each in singles and doubles. Her return is a welcomed one, as she will bring much-needed leadership and experience to a young roster.

Katherine Villarroel will also play a big role in the coming season. Villarroel attended Hunter College her freshman year, but did not play on the team. She made her Dolphins debut as a sophomore in the abbreviated 2017 spring season, and will look to hit the ground running in her first full campaign.

All told, the Dolphins enter the 2017-2018 season fully stocked on both the men’s and women’s sides as they bring these new faces into the mix. After falling short at the semifinal hurdle in four of the past five seasons, both squads will be hungry to go one better and put it all on the line for a championship in the finals come season’s end.