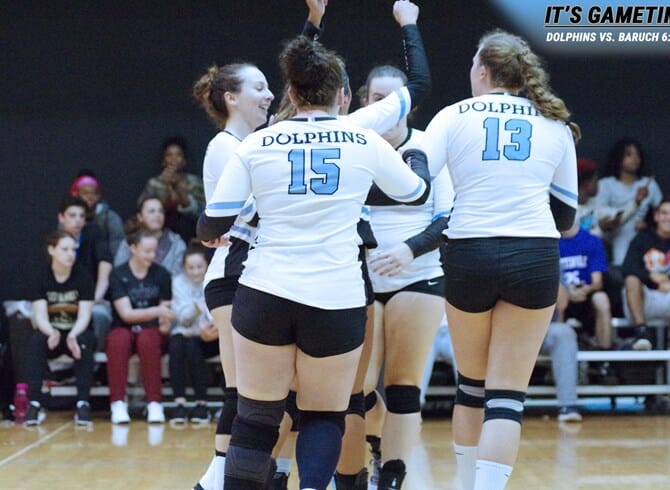 The College of Staten Island women’s volleyball program is back in action tonight after downing CUNYAC opponent Medgar Evers College on Tuesday night.  Tonight the Dolphins will face another CUNYAC opponent in Baruch College at 6:00 pm.

CSI vs. BARUCH COLLEGE AT-A-GLANCE
Matchup:  CSI (2-5, 1-2 CUNYAC) vs. BARUCH (5-5, 2-1 CUNYAC)
Where: 55 Lexington Ave, New York, NY 10010
All-Time Series: Baruch leads 28-4-1
Last Meeting: October 25, 2016 – Baruch won 3-0
Players to Watch (CSI): Caitlin Esposito is coming off of a 9 kill performance against the Cougars while hitting .172. With those 9 kills, Esposito now leads the Dolphins with 32 kills. Vanessa Reyes leads the Dolphins with 52 assists on the year after picking up 13 on Tuesday.  Reyes has played well in her new role this season and will look to continue her solid play tonight.
Players to Watch (BC):  Katherine Chen will be the threat for the Bearcats tonight as she will use her size to get above the net and collect kills for her squad.  Chen paces the way with 54 kills while sitting in second with seven blocks. Chen also leads the way with 103 assists. Yijia Cai is a force at the net and has amassed 16 blocks this season, 13 of them solo.
News and Notes: The Dolphins are on a 17-match losing skid against the Bearcats, with the last win coming in 1996.  The Dolphins nearly beat the Bearcats in 2013 when they forced a fifth set however, they ultimately fell 3-2. Since that match, the Dolphins have been swept in the last three matches. Baruch College comes into tonight’s match on a three-match win streak while the Dolphins also come into tonight’s match off of a win.