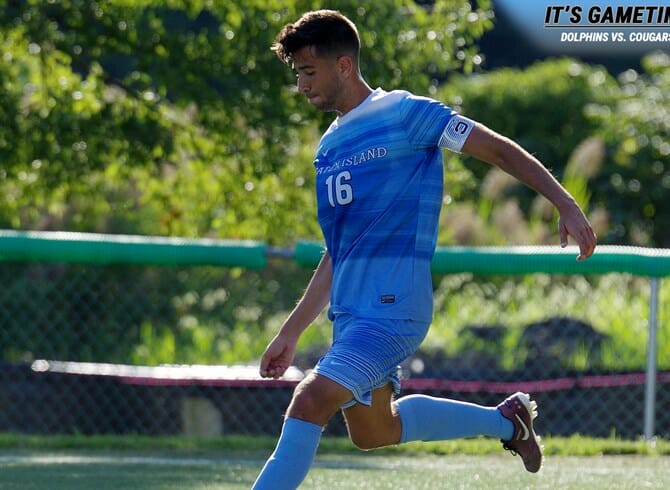 The men’s soccer team is chasing history tonight, looking to equal their longest winning streak in 14 years when they travel for the second-straight time to the Aviator Complex in Brooklyn, this time looking to topple CUNYAC-rivals Medgar Evers College in a game under the lights at 7pm.

CSI vs. MEDGAR EVERS COLLEGE AT-A-GLANCE
Matchup:  CSI (7-1, 1-0 CUNYAC) vs. Medgar Evers College (1-7, 0-2 CUNYAC)
Where: Aviator Field, 3159 Flatbush Ave, Brooklyn, NY
All-Time Series: CSI leads 25-14-1
Last Meeting: September 24, 2016 – CSI won 2-0
Players to Watch (CSI): Senior Adrian Cosovic is coming off of his best game as a Dolphin offensively, as he mustered up his first career CSI hat trick, helping CSI to a 4-0 win over York on Wednesday.  He is now second on the team with four goals, tied with freshman Joe Bolella, who is second on the squad with a pair of assists as well.  The points leader is freshman Bryant Navarro , who has a team best five goals and an assist for 11 total points, and a team-best three game-winning goals.  Ivan Barreraserao upped his win streak in goal to 4-0, recently posting his second shutout.  He has a 0.26 GAA with a .929 save percentage.
Players to Watch (MEC):  Four different goal scorers lead the way for the Cougars with the points leader being Darell Ambersley who has provided a goal and an assist.  Jordan Coke will look to get into the score sheet after leading the team with 15 shots, followed closely by Miguel Deana who has gotten off 10 shots thus far.  James Hyacinthe and Yasir Eliassaint have split time thus far in goal for MEC.
News and Notes: This has been a series dominated by the Dolphins as they have won seven in a row in the set dating back to 2012, a run that includes two postseason appearances.  CSI has not allowed an MEC goal since 2014, shutting MEC out by a 21-0 score over the last 270 minutes of play.  That doesn’t bode well for the Cougars, who are on a five-game skid since defeating York College, 3-0, back on September 7.  The other common opponent on the schedule has been New Jersey City University.  CSi defeated NJCU at home, 2-0, while MEC fell hard to the Gothic Knights, 5-0, in Jersey City.  MEC is 0-3 at home this season, although their one win did come at Aviator Field (a home game for York).  MEC finished 3-3 at home last season.  CSI is 9-6 on the road all-time against MEC, and the Dolphins are 3-0 so far on the road.  Their seven-game win streak is now their longest since 2003, when they ripped off eight in a row.  That year the Dolphins went 13-3-2 and played for the CUNYAC Championship.  CSI has posted shutouts in three of their last four games after giving up five goals through their first four games.  Meanwhile, MEC recently broke an over-400 minute scoreless streak when Abdul Edwards was able to tally in their last game, albeit a 5-1 loss to John Jay.