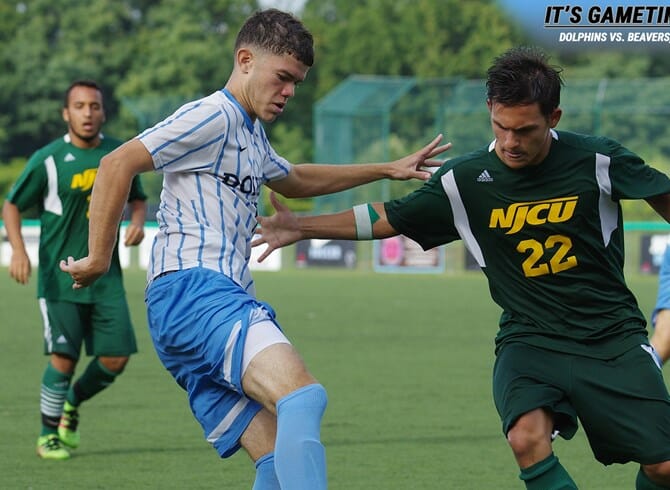 CSI vs. CITY COLLEGE OF NEW YORK AT-A-GLANCE
Matchup:  CSI (4-1, 0-0 CUNYAC) vs. City College of New York (0-4, 0-0)
Where: CSI Soccer Complex – 2800 Victory Boulevard, Staten Island, NY
All-Time Series:  CCNY leads, 32-8-3
Last Year’s Meeting:  CCNY won, 1-0
Players to Watch (CSI): Three Dolphins are tied among the scoring leaders for the team.  Senior Dardan Nika has a pair of goals and two assists and a team-leading 23 shots to guide the group, while freshmen pair Joe Bolella and Bryant Navarro have come on strong, notching three goals apiece.  Bolella is also second on the team in shots fired with 12.  The CSI back four or Wilson Quintero, Erick Conde, Ryan Layman and Miguel Morales have logged the top minutes for the team, and together with keeper Ivan Barreraserao, the team notched its first shutout of the season in Wednesday’s win over NJCU.
Players to Watch (CCNY):  CCNY is starving for offense, as they have been shutout in three-straight and have only mustered 13 total shots this season.  Kamraoudine Tchabalandja has scored the team’s only goal and he leads the team with three total shots, two of them on goal.  Marcus De Pompeis has been active in net, making 23 stops in three games for the Beavers.  He also leads the team with a .657 save percentage.
News and Notes:  In a series that dates back to 1978, CCNY has had the better way of it historically and as of late as well.  The Beavers have won four of the last six meetings, including the 2015 CUNYAC Final, 2-1.  Last year, a goal by Miguel Muniz with 12 minutes remaining sealed the game in a CCNY win, 1-0.  Muniz is listed on the CCNY roster but is yet to play this season.  The Dolphins are just 6-13-1 at home against CCNY.  They defeated CCNY here back in the 2015 regular season, 2-1. Prior to that CCNY had won four-straight against CSI in Staten Island.  The Dolphins recorded their first shutout of the season against NJCU on Wednesday, meanwhile CCNY has not scored a goal in 273 minutes, a streak of three straight games in which they have been out-scored, 17-0.  Thus far, the teams have shared no common opponents.  Today is game four of a six-game season-opening road swing for CCNY.  Dating back to last season they have now lost seven straight road contests.  CSI is 3-1 at home this season.  After today, CSI starts a three-game road swing, starting by travelling to face Valley Forge on Monday afternoon in Pennsylvania at 4pm.