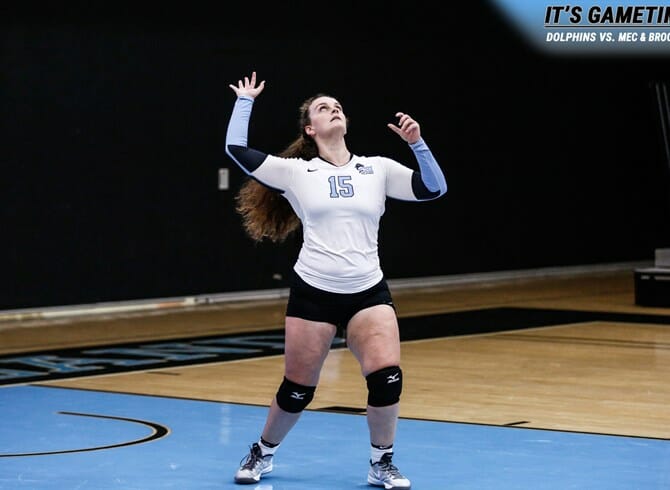 The College of Staten Island women’s volleyball team is still looking for their first win of the season, and they will look to get two in one day today when they travel to Brooklyn College to take on both Brooklyn and Medgar Evers College in a CUNYAC trimatch to open the conference season.  CSI will play Medgar Evers at 12 Noon and then follow by playing the host Bulldogs at 2:00pm.

CSI vs. MEDGAR EVERS COLLEGE / BROOKLYN COLLEGE AT-A-GLANCE
Matchup:  CSI (0-2, 0-0 CUNYAC) vs. Medgar Evers College (0-2, 0.0) / Brooklyn College (3-0, 0-0)
Where: Brooklyn College – 2900 Bedford Ave., Brooklyn, NY
All-Time Series:  vs. MEC – CSI leads 29-11 / vs. Brooklyn – BC leads 16-12
Last Year’s Meetings:  CSI defeated MEC twice / BC defeated CSI twice
Players to Watch (CSI):  Through two games, freshman Teresa Maresca leads the way with a modest eight kills, while sophomore Caitlin Esposito leads the pack with 35 kill attempts.  Senior Vanessa Reyes is serving thigs up with 12 assists and is second with three aces.  Defensively, Cassidy Iannariello leads the way with 14 digs whileEsposito follows suit with 12.  Margaret O-Malley-Rebovich has been a force in the middle with four blocked shots.  Look for her to continue to be a presence near the net.
Players to Watch (MEC): Elizabeth Figaro is a player to watch, as she leads MEC with six kills through two matches, adding an ace and two digs.  Shania Laguerre has been active with 9 digs while Melissa Wright is right behind with eight.  Wright is also hot behind the service line, leading the Cougars with four service aces.
Players to Watch (BC): BC is off to a great start this season, and no one is hotter than Michaela Appel, who already has 35 kills on 84 attacks for a huge .274 percentage.  She has also scattered 5 service aces.  Sarina Rozek has also sparkled with 24 kills and is averaging 1.7 aces per set for a total of 17 already this season.  Jailene Paredes has been all over the back line, making 53 digs so far
News and Notes:  Today’s contests are the conference openers for all teams.  CSI defeated MEC twice last year, both by 3-0 scores.  CSI fell to Brooklyn twice by 3-0 scores as well, including a loss in the CUNYAC Quarterfinals at Brooklyn.  BC has won eight straight against the Dolphins dating back to 2009, and BC is 4-3 all-time against CSI at home.  Meanwhile, CSI has won six of the last seven against MEC.  CSI is 10-4 against the Cougars on neutral territory, as they are this afternoon.  These two teams will meet again on September 19 in Brooklyn on the Medgar Evers’ campus.