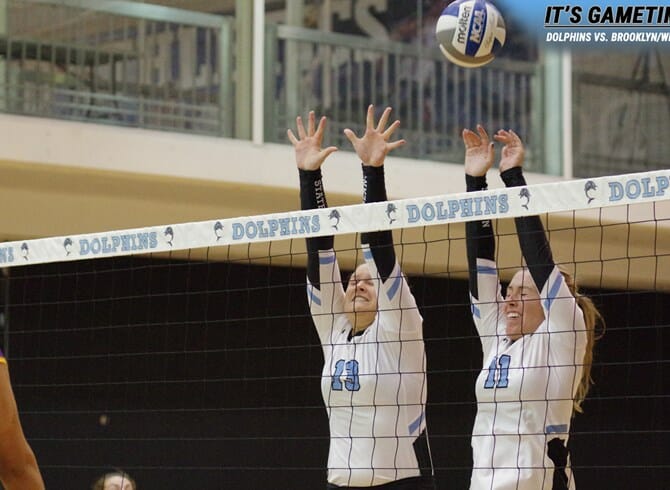 The College of Staten Island women’s volleyball team will be in action today when they host both William Paterson and Brooklyn College non-conference tri-match.  The first match of the day will start at 11:00 am at the CSI Sports & Recreation Center.

CSI vs.BROOKLYN / WILLIAM PATERSON AT-A-GLANCE
Matchup:  CSI (2-6) vs. BROOKLYN (6-4) / WILLIAM PATERSON (5-5)
Where: 2800 Victory Blvd., Staten Island, NY 10314
All-Time Series: Brooklyn leads 17-12 / WPU leads 15-0
Last Meeting: September 9, 2017, vs Brooklyn / October 15, 2016, vs William Paterson
Players to Watch (CSI): Teresa Maresca tallied seven kills in the loss to Baruch College.  The Dolphins played well thanks to Maresca’s seven kills however they were not enough to lift the Dolphins past the Bearcats.  Margeret O’Malley-Rebovich will look to assert her dominance at the net and force opposing hitters to find an open look to get it passed her. Jessica Cafiero also had a great night against the Bearcats, picking up 22 assists.
Players to Watch (BC): Michaela Appel leads the Bulldogs with 90 kills on the year.  However, it was Sarina Rozek that torched the Dolphins with 16 kills in their meeting earlier this season.  Rozek will look to have the same success she did earlier in the year this afternoon. Kate Meltsin paces the Bulldogs with 114 assists on the year and will look to add to her tally this afternoon.
Players to Watch (WPU): Alyson Toman is on a torrid pace this season and leads the Pioneers in kills with 117.  Chelliah Phillips has been outstanding at the net for William Paterson and has collected 23 blocks this season.
News and Notes: The Pioneers have only ever dropped two set to the Dolphins in their history.  The Dolphins have struggled against the Bulldogs in recent history, losing their last 9 matches dating back to 2010.  Since Staten Island and Brooklyn went to five sets back in 2013 the Bulldogs have not dropped a set, sweeping the Dolphins in five straight matches. The Dolphins have been improving every game this season and nearly took Baruch to a fourth and fifth set.