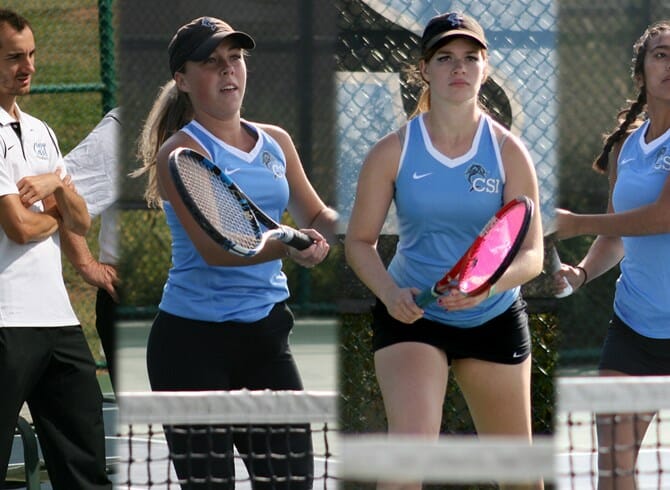 College of Staten Island women’s tennis Head Coach Arthur Kapetanakis was named the CUNYAC Coach of the Year, headlining a group of five in total awarded with year-end honors in the sport.  Samantha Maizer, Hannah Bruschi and Katherine Villarroel were all honored with second-team All-Star citations, while sophomore Tristiana Adragna was named to the conference’s All-Sportsmanship Team.

Despite the loss of a pair of valuable seniors, Kapetanakis guided a young Dolphins team to a 5-1 conference record this season, winning the CUNYAC Regular Season Championship in the process.  The Dolphins would ultimately lose in the postseason semifinals to eventual champion John Jay College but by a slim margin at 5-4.  At 8-4 overall, Kapetanakis lifted his career mark to 29-19 overall with the women’s program since taking over the team in 2015.

Sophomore Samantha Maizer missed CSI’s entire 2016 season after a quality freshman debut in 2015.  She finished 4-7 overall in Singles play with all but one match taking place in the top spot.  Doubles, however, is where Maizer shined,as she boasted a tremendous 9-0 mark overall, winning two matches in the pole position and the rest at No.2, doing it with three different partners throughout the year.  Her unblemished mark included a 4-0 record within conference play.

Fellow sophomore Hannah Bruschi finished her 2017 campaign on a two-match win streak, going 6-2 overall in Singles play, going a perfect 4-0 at the Nos. 5-6 Singles positions, her natural spots in the lineup.  Like Maizer, Bruschi was also used to doing damage in Doubles, going 8-2 overall , including a 5-1 mark at No. 3, playing with four different partners throughout the season.

Katherine Villarroel joined the Dolphins in the spring on 2017, and played her first full season with the Dolphins this fall.  The sophomore impressed, going 6-4 in Singles play this year, a mark that included a 4-1 mark at the No. 4 position, where she spent most of her time.  When play switched to Doubles, Villarroel was also potent, going 8-1 overall with four separate partners.

Rounding out the list of honorees was Adragna, who was named to the All-Sportsmanship team for her selfless leadership and reliability on and off the field of play.  A two-sport star, Adragna is also a standout cross-country runner who will look to medal at the upcoming championships in November.

Although Championship competition has concluded, CSI’s season will continue in the spring semester with four matches on the schedule starting in mid-April.