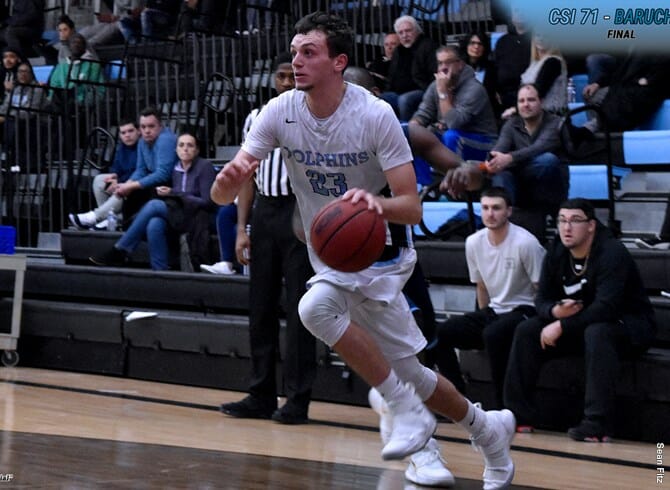 The College of Staten Island men’s basketball team saw its season-long seven-game win streak halted tonight, falling to visiting Baruch College by a 78-71 count at The Tank in Staten Island.  The win for Baruch evened the season series against the Dolphins at one game apiece and improved the Bearcats to 10-8 overall and 7-3 within the CUNYAC while the Dolphins fell to 11-8, 9-2, respectively.

In a first half that saw five lead changes and two ties, CSI held the advantage through much of the early stages.  Two baskets by Christian Taylor and an Edin Bracic three staked CSI to a 9-2 lead, and the Dolphins later held a 15-8 advantage going 6-6 from the floor in the opening six minutes.  The Dolphins worked the lead up to 19-11 with 11:30 to go thanks to a pair of Jade Spencer free-throws, but from there the Bearcats started to chip away.

The visitors went on a 9-0 run to take their first lead, 20-19, with 6:54 to go in the first half.  William Sixsmith started with a three and Dwayne Brydie secured it with a transition basket.  Consecutive Taylor baskets gave CSI back the lead and the game teetered back-and-forth until a Benjamin Boateng freebie and a basket from him as time winded down gave Baruch their biggest edge to that point, 34-30, at the break.

Baruch would expand the lead to as many as five points on a pair of occasions in the second half thanks to a pair of three’s from Andre Harris and Anthony Gibbs, but CSI refused to go away and managed to piece together an 11-2 run over three minutes to reverse course and take a 52-48 lead with over 11 minutes to play, helped along by two Adeola Latunji jumpers.  CSI would power up by six, 57-51 with 9:15 to play, but then the Bearcats made their most spirited run, a 6-0 clip that featured four Allen Villar points that grabbed them back the lead.

After trading the lead on four occasions, a three-point play by Robert Rossiter gave CSI a 64-63 edge with 5:33 left, but it would be their final lead  and BC’s Chimaechi Ekekeugbor nailed a layup to start a 9-1 run, as CSI went silent from the field missing on seven of eight shots to start the final five minutes.  Baruch took full advantage, hitting on their final eight points via the free-throw line to ice the contest.

Latunji led all scorers for CSI with 24 points while Taylor popped in 22 points.  Latunji would also lead the squad with 9 rebounds.  Bracic would add 13 points as well as five steals.  For Baruch, Villar came off of the bench to lead the unit with 14 points on 4-5 shooting and a 6-7 clip from the line.  Gibbs finalized with 13 points.  Leading-scorer Ekekeugbor was held to eight points on 1-6 shooting but added 10 rebounds.  CSI hit on just three of 17 three-point shot attempts while BC canned 8-18.  The Dolphins lost the turnover battle 13-12 and the rebounding battle 39-37.

CSI will now look to bounce back when they host York College of Saturday.  It will be Alumni Day at the College with the Alumni playing one-another at 11am followed by CSI’s tip-off with York at 1pm.  Prior to the contest, the Dolphins will honor long-time Head Coach Tony Petosa, who left the team at the close of the 2016-17 season.