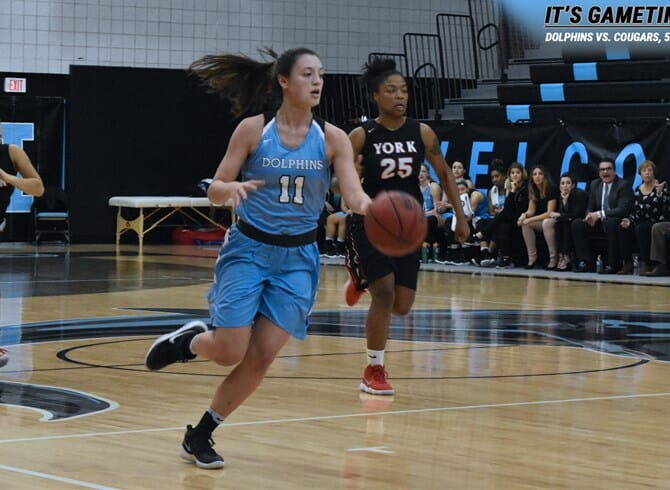 The College of Staten Island women’s basketball team returns to their home court tonight to take on Medgar Evers College in another CUNYAC matchup. The Dolphins are currently on a four-game win streak while the Cougars come into tonight’s game on a 32-game losing skid which dates back to January 11, 2017.

CSI vs. MEDGAR EVERS COLLEGE
Matchup: College of Staten Island (17-3, 11-1 CUNYAC) vs. Medgar Evers College (0-20, 0-11 CUNYAC)
Where: The Tank – 2800 Victory Boulevard, Staten Island, NY
All-Time Series: CSI leads, 47-3
Last Meeting:  January 9, 2017 – CSI won 92-41
Players to Watch (CSI): Christina Pasaturo has now scored 21 points in back-to-back games while shooting 68% from the floor during that span. Pasaturo’s 23.5 points per game not only lead the Dolphins but also the CUNYAC.  Pasaturo is one of the nations most prolific scorer’s as she ranks top-5 in scoring. Diana Todaro is averaging 11 points per game over her last three while also pulling down 9 rebounds per game. Samantha Flecker will be troublesome for the Cougars as she can score from anywhere on the court and is always lurking around the rim, looking to help give her team or herself a second-chance opportunity.
Players to Watch (MEC): Cyndi Whyte leads the Cougars in scoring with 12.5 points per game this season. Whyte is also a factor on the boards as she grabs an average of 6.7 per game. In the last meeting against the Dolphins, Whyte was poured in 17 points and grabbed seven rebounds. Janaisha Carrington leads the way with 2.9 assists per game and will look to find the open voids in the Dolphins’ defense to slot passes inside for easy layups. Malecka Davis has quick hands on defense and is averaging 2.2 steals per game, which is a team high.
News & Notes: The Dolphins have not lost to the Cougars since January 3, 2007, when the Cougars won 75-68. CSI is currently on a 22-game win streak against Medgar Evers and has only ever lost once at home, which came in the second meeting ever in 1994. The Cougars are averaging just 41 points per game while allowing 79. The Dolphins, conversely, are averaging 79 points per game and allowing just 53 per game. Defense is a big part of the Dolphins’ success, as they score an abundance of points off of turnovers as they average 30 forced turnovers a game. The Dolphins outrebounded the Cougars 48-24 in the last meeting and scored 26 points in the paint.