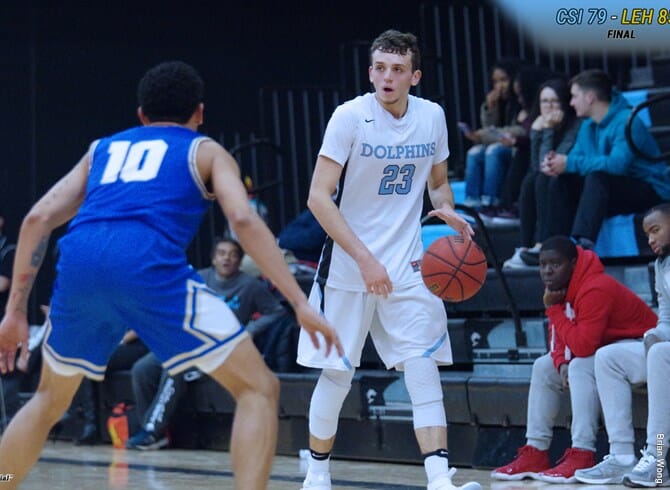 Lehman College used a feverish finish to tie in regulation, then out-performed the College of Staten Island in overtime to soar past the Dolphins, 85-79, in CUNYAC play at the Tank in Staten Island, NY.  The win catapulted the Lightning to 8-3 overall and a perfect 4-0 in the conference, while the Dolphins fell for the third-straight time, falling to 4-7 overall and 3-1 in the conference.

The Dolphins led nearly start to finish in the opening frame, using an 8-0 run early to stake themselves to a 10-2 lead using a pair of baskets from Adeola Latunji and Raymond Savage to inflict damage.  CSI led from there throughout the stanza, ballooning the lead up to as many as 16 when Robert Rossiter and Savage canned three’s to make it a 32-16 game with 2:40 to play in the frame.

Lehman had a fitting response to end the period, going on a 9-0 run to make it 32-25 at the half.  Andrew Utate used a big three-point play in the middle of the rally to continue the momentum.

After extending to nine points on a Christian Taylor jumper at 17:11 of the second, CSI went cold from there and Lehman took advantage, going on an immediate 7-0 run, spearheaded by a Mylo Mitchell three.  The Lightning finally drew even with a Trevon Bennett lay-up to make it 41-41 at 14:52.  From there, the lead would change hands five times in regulation.  Three straight Taylor jumpers gave CSI another cushion at 57-52 with 8:09 to play, but a Utate three followed by a Miguel Haboosh lay-up later gave Lehman back the edge at 65-63 with 3:11 to go.

With under a minute to go, CSI had a 68-67 lead, and senior Edin Bracic made two free-throws to make it 70-67 with 26 seconds to play.  CSI would then force a miss, but two offensive rebounds by Lehman kept them in the game and Luis Hernandez split one of two free-throws after being fouled with seven ticks to play.  Rossiter secured the rebound for CSI on the second missed free-throw but was promptly fouled.  With a chance to seal, CSI would unfortunately miss and Lehman would get a final attempt.  Hernandez did the honors, sweeping all the way in from the arc to put in a lay-up as time expired, sending the game to overtime at 70-70.

Feeding off the momentum of regulation, the overtime session belonged to Lehman.  The visitors raced out to a 9-2 run to start as CSI stayed mired in poor shooting.  The Dolphins did not register a field goal until there were just 25 seconds left in the extra session, a three by Rossiter to cut the Lehman lead to 81-76.  Luis Hernandez was outstanding from the free-throw line, making all six of his freebies with under a minute to go to put the game on ice.

Lehman was led by Hernandez’ 24 points, adding nine rebounds, also a team high.  Utate poured in 22 points with a team-best six assists.  Haboosh added 15 points with Mitchell notching 12 with five assists.  Taylor scored 22 for CSI with five rebounds in 41 minutes before fouling out.  Adeola Latunji notched 15 points and a career-high 18 rebounds (11 offensive) in the loss.  Savage, who also fouled out after 24 minutes, finished with 13.  CSI owned a 49-39 edge in rebounds but committed 18 turnovers to Lehman’s 9, resulting in a 21-5 edge in points off of turnovers for the visitors.

CSI will next be in action on Saturday, when they visit Baruch College at 4pm for another conference road test.