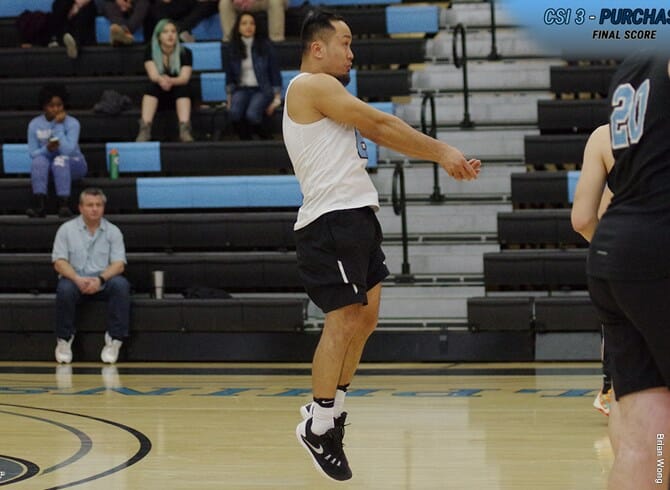 Purchase, NY | The College of Staten Island men’s volleyball team scored their first victory of the season tonight, taking to the road to take down Purchase College for the first time in program history, 3-0.  Individual set scores were 25-12, 25-23, and 25-17.  The Dolphins imp[roved to 1-3 on the year, scoring the first collegiate men’s volleyball win for new head coach Lak Wai (Larry) Ng, while the Panthers fell to 0-4.

CSI fell behind in the opening set, 2-0, but a quick 5-0 run righted the ship, helped along by a Christian Dumadag kill and ace.  Later in the set, a Herman Liu kill extended CSI to 10-5, prompting a Purchase timeout.  Dumadag would add three more kills in the frame from there, however, and CSI took the first set going away, 25-12.

The second set of the match was a crucial one, and came down to the wire, giving CSI a great deal of momentum it would need for the last set.  CSI would take a quick, 2-0, lead thanks to kills by Michael Liang and Dumadag, but a Masaya Funakosh kill got Purchase on the board.  After Purchase then went up by three, CSi came back to force a 7-7, setting the stage for a back-and-forth set.

The Dolphins had themselves a 15-11 lead, making the most of a pair of PC attack errors, but then the Panthers cut the lead, eventually tying the match at 16-16.  At the critical point of the match, Tairou Diaman registered a kill to start what would be a 6-0 rally to help CSI take a 22-16 edge.  Luke Kubisch would respond for Purchase with an ace and then a kill to get the Panthers back via a 5-0 run, 22-21, but he would error on a serve to give the side out back to CSI.  James Yi then bounced in a kill in the corner and Dumadag did the same to help CSI escape the set with a 25-23 win.

That win seemed to give CSI a spark they needed to close things out. CSI took a big 8-1 lead to start the final set, highlighted by three Dumadag aces.  Two kills by Kubisch for PC narrowed CSI’s edge to 15-11, but after that CSI was up to the ask, using Diaman and Mark Palencia kills to take a more commanding 20-12 lead, en route to a 25-17.

CSI will now have a few days off before they start their CUNYAC schedule on Monday, February 19, at Lehman College, taking on both CCNY and Lehman, beginning at 11am.