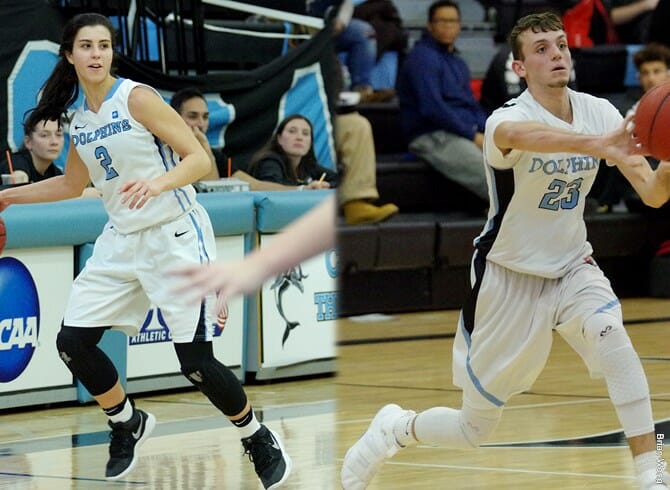 Riding of the highs of outstanding basketball seasons, the College of Staten Island’s Christina Pasaturo and Christian Taylor have been selected among All-Region honors by D3hoops.com.  Pasaturo was named a first-team Atlantic Region selection, while Taylor took home a third-team honor.

Pasaturo is familiar to D3hoops.com, selected as a Preseason All-America Honorable Mention before the season tipped off in November.  She followed with an outstanding senior campaign which saw her average over 22 points per game, leading the team as well in three-point baskets (95), assists (117) and steals (90).  At the conclusion of the season she was named CUNYAC Player of the Year for the second-straight campaign, making good on her Preseason Player of the Year selection as well.  The Dolphins won over 20 games for the third-straight season and advanced to the CUNYAC Championship game.

“Winning first-team All-Region is such an honor and I am extremely grateful,” said Pasaturo, who was acknowledged on the team last year as well.  “I am excited at the recognition it brings to the team and our coach and for our success as a whole.”

Montclair State University’s Katie Sire took home the Atlantic Region’s Player of the Year honor, while St. Joseph’s (Brooklyn) star Kelly O’Donnell was named Rookie of the Year.  The College of New Jersey’s Chessie Jackson was named Coach of the Year.  Brooklyn College’s Karen Mak was the only other CUNYAC player cited, landing on the third-team.

Over on the men’s side, few players had quite the impact of sophomore Christian Taylor, who caught fire at the end of the season, a run that included a 38-point effort in the NCAA Division III National Championship loss to Cabrini University in the opening round of play following a CUNYAC Tournament Most Valuable Player honor.  Taylor finalized the year leading the team with 17.3 points per game and garnering 107 assists, placing second on the team in rebounds with 5.9 per game.  He led the conference in field goal percentage at 55.6%, en route to a first-team All-Star selection at the conclusion of the season.

“This is a great honor,” commented Taylor.  “My teammates and coaches helped make this possible.  The coaches pushed me to be the very best I could be and my teammates worked hard every day in the gym to make me better.  It was a great season for us and it helped set the bar high for us next year.  My focus now is on three-peating and getting back to the NCAA Tournament.”

Tyheim Monroe was named Player of the Year representing Cabrini while Aaron Johnson-Chavez from Neumann and Myles Mitchell-White from Montclair State shared Rookie of the Year honors.  Wilkes College’s Izzi Metz won Coach of the Year.  Baruch College’s Chimaechi Ekekeugbor was named to the first-team, while Lehman’s Luis Hernandez was a second-team honoree.