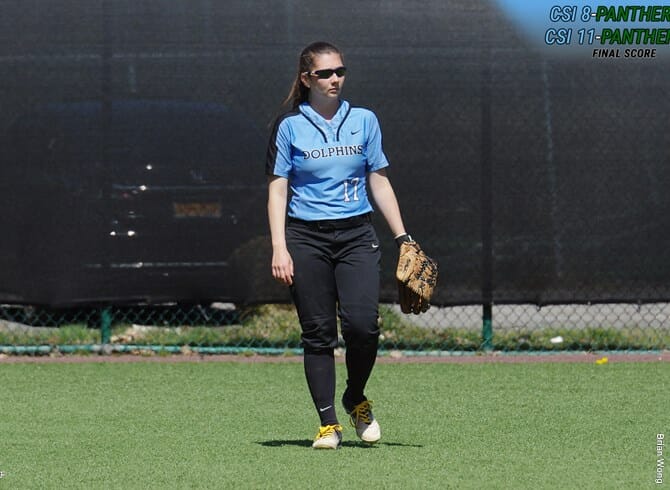 Staten Island (18-0) needed just six innings in both games to defeat Old Westbury (12-12) to increase their win streak to six.

Both pitchers played a factor in the 8-0 win over the Panthers in game one but one of them was not from inside the circle. Nicolette Trapani (8-6) tossed 83 pitches and struck out 11 batters, collecting a no-hitter in the process, to pick up her eighth win of the season. Alison Meagher, the Dolphins’ other top pitcher, also left her mark on the game when she came in to pinch hit for Trapani in the bottom of the sixth with two batters on.  Meagher waited for her pitch and belted it over the center field wall for a three-run walk-off home run to lift the Dolphins past the Panthers.

The Dolphins opened up the scoring in the first inning, using an error by Kaite Skelly who saw the ball go right between her legs to extend the inning after knocking the first two Dolphins batters off. With two runners on Erica Olsen hit a shallow single to left center to drive home both Jamie Holmes, who had reached on a double, and Vanessa Jioia to put the first two runs on the board. Julianna Cretella added another for the Dolphins with a double to left center to score Olsen.

Staten Island added another run in the fifth when Antoinette Galbo tripled and was brought home by a groundout by Jioia.

Meagher ended the game early for the Dolphins with a walk-off, three-run homer over the center field wall for her team-leading, third home run of the season.

The Dolphins received a shock in the opening frame as Old Westbury tallied three runs on three hits.  CSI answered back with a run of their own but quickly took the lead back in the bottom of the second when they scored four runs to take a 5-3 lead.

Christina Cerverizzo got the Dolphins going with a single to right center.  Patricia Riches came to the plate with the bases loaded after Cretella and Kristen Meagher got on base two batters earlier. Riches crushed one up the middle for a 2 RBI double.  Jioia picked up the other 2 RBI with a triple to right field to give the Dolphins the lead for good.

CSI scored two more runs in the bottom of the sixth once again to end the game early and keep their win streak alive.

Up next for the Dolphins is New Jersey City University on Friday, April 27 at the CSI Softball Complex.