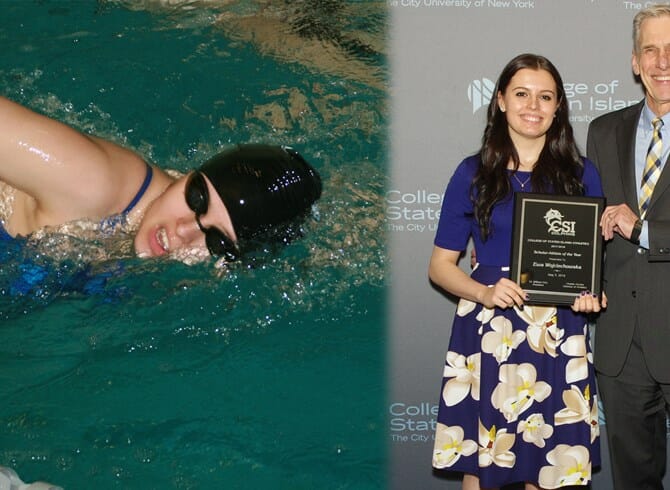 Indianapolis, IN | It’s been quite an extraordinary year for College of Staten Island senior Ewa Wojciechowska.  On the heels of graduation this past May, Wojciechowska added to her list of achievements by being tabbed an NCAA Woman of the Year, the official candidate representing CSI and the City University of New York Athletic Conference.  Wojciechowska is joining more than 500 other distinguished honorees of this award nation-wide that encompass all NCAA divisions, and the NCAA will then announce a Top 10 from each division in October, followed by the announcement of its Woman of the Year on October 28.

“Knowing how many female student-athletes there are and knowing how many are selected for this award really puts into perspective what an honor this is,” said Wojciechowska.  “The fact that I was chosen by the CUNYAC as well, knowing how many worthy individuals there are that compete with the CUNYAC, is also a great honor for me.  Without the support system that CSI and the CUNYAC provides, none of this would be possible.”

NCAA Woman of the Year honors athletic excellence, academic achievements, community service, and leadership of outstanding female college athletes.  For Wojciechowska, the honor is the latest in a long line of hardware for the senior.  On top of setting a total of 12 individual and relay records at the College, the senior boasted an unprecedented 4.0 GPA majoring in English, Writing and Linguistics.  She was both the CUNYAC Preseason and Postseason Most Valuable Performer this past season, going undefeated at the CUNYAC Championship as well.  At the close of the calendar year, Wojciechowska was named CSI’s Scholar-Athlete of the Year and a few days later was named Female Scholar-Athlete of the Year by the CUNYAC at the Michael Steuerman Scholar-Athlete Awards Dinner on May 17.

“I really enjoyed my college experience,” she said.  “I never really set out to win awards, and so to get all of this recognition my senior year has been very exciting and I’m honored by it.  To win an honor like the CUNYAC Scholar-Athlete of the Year and then to be recognized by the NCAA as well, it’s overwhelming and I am truly grateful.”

Rooted in Title IX and directed by the NCAA Committee on Women’s Athletics, the NCAA Woman of the Year program celebrates the accomplishments of female college athletes across all three NCAA divisions. In 2018, more than 200,000 women are playing college sports, and the NCAA received a program record of 581 nominations for this prestigious award.  The NCAA has been serving Woman of the Year honors for the last 28 years.

While the NCAA makes its final selections over the next few months, Wojciechowska has further educational pursuits.  She is hoping to start post-graduate work in the Library Sciences program at Rutgers University in September, and she is currently volunteering in the New York Public Library system.  She hopes to parlay the experience into a full-time position as an academic librarian.

To find out more about the NCAA Woman of the Year honors, visit their website HERE.