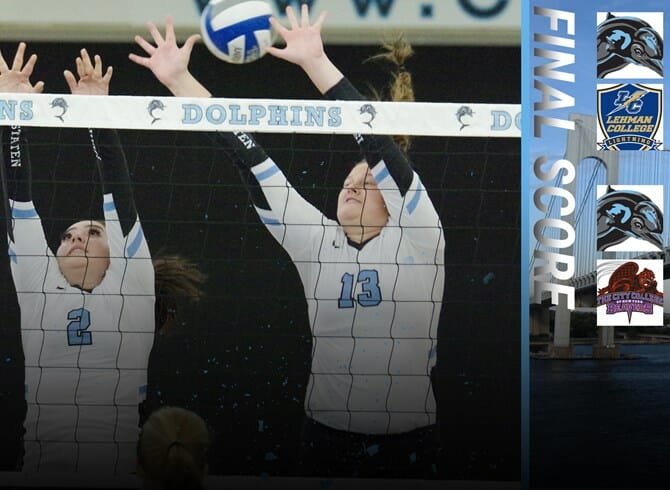 New York, NY | The College of Staten Island women’s volleyball team rebounded nicely from a pair of mid-week defeats by opening up the conference season 2-0 after a trimatch sweep of Lehman College and City College of New York in a morning pair played at CCNY.  The Dolphins overpowered Lehman by scores of 25-10, 27-25, and 25-17 in the opener, and then came right back to take a 3-0 win over CCNY by scores of 25-19, 25-21, and 25-21.  With the wins CSI improved to 4-2 overall and 2-0 within the CUNYAC.

MATCH ONE – CSI 3, LEHMAN 0
In the opening game, CSI got off to a crisp start, tallying off a 6-1 run to start things off against Lehman.  Two kills by Jay-La Guy were the highlights, and then CSI went up by a wide margin after a 5-0 run gave them a 17-5 lead.  Francesca Castellano was the catalyst there, powering home three kills.  After a late timeout, Caitlin Vernon was able to spark Lehman with a pair of kills, but it proved too late as Lehman committed a couple of crucial errors to drop the first set, 25-10.

The closest set of the afternoon would come next.  CSI would quickly take a 3-0 lead thanks to three more Lehman errors, and CSI looked well on their way when they charged forward again to an 11-0 run to open up a huge 14-1 advantage, helped along by five Alexandria Boachie-Ansah aces.  Lehman would call for time, and then they proceeded to go on the offensive from behind the service line. Paulette Sepulveda notched four-straight aces to get the Lightning started, and then later, LC ripped off a 13-1 run of their own to take a 23-20 lead late in the set.  Boachie-Ansah then responded with a kill for CSI, and she followed up with an ace after an LC error to tie the score at 23-23.  Yet another ace gave CSI the lead, but Lehman returned fire to tie, and then they took the edge on a Vernon kill.  Vernon errored on her next attempt, however, and the score was tied again at 25-25.  Again, CSI survived due to errors as Lehman would error on their next two attempts and CSI was able to hang on, 27-25.

The Lightning forged ahead and were able to take a 4-1 lead in the early stages of the third stanza, but a resilient CSI ripped off an 8-1 run, aided by a Margaret O’Malley-Rebovich kill and two Celina Mendez aces.  Two Lehman errors then gave CSI a more comfortable, 14-7, edge.  Play was back-and-forth from there, and after Lehman called a late timeout, CSI was able to score their final three points to win the set and the game, 25-17.

MATCH TWO – CSI 3, CCNY 0
The home CCNY Beavers were the side that started sharp in CSI’s second match, as they would take a 6-0 lead to take the early lead.  Two Rachel Ramirez kills made the difference before CSI’s Jacqueline Roloph smashed one down to finally get CSI on the board.  Despite chipping away, it wasn’t until a 4-0 run that tied the score at 13-13 that got CSI all the way back, and later a Jay-La Guy spike gave CSI their first lead at 15-14.  CCNY took back the lead and went up 18-15, but CSI responded in a huge way, going on a 10-1 run to end the frame.  In the streak, Caitlin Esposito’s serve was the difference, as she powered in six aces, while O’Malley-Rebovich put in a pair of kills.

CSI kept things going by going up, 3-0, in the early stages of the second set. but CCNY came back to take a 7-5 lead thanks to a kill by Nadia Campoverde.  CSI weathered the play and then took back the lead on a Mendez ace and another O’Malley-Rebovich kill.  A CCNY kill by Kayla Oge and then a CSI error gave the Beavers a 16-15 lead.  Again, however, CSI would finish strong, this time out-scoring the Beavers 10-5 down the stretch to take a 25-21 win.  Castellano notched an ace and a kill while O’Malley-Rebovich powered home two more kills to guide the Dolphins.

Needing one more set to clinch, CSI was very sharp in the final set, taking a 25-14 win.  CSI opened on a 4-0 spurt, and then went up 6-1, all on CCNY errors, before CCNY asked for time.  Later, CSI went up by as many as 10, 19-9, using aces by O’Malley-Rebovich and Mendez to lead the way.  Rachel Ramirez scored three aces for CCNY to give the Beavers life, but CSI was able to close things out thanks to yet another O’Malley-Rebovich kill and Boachie-Ansah ace.

O’Malley-Rebovich led the way with 12 kills with no errors in 16 attacks, and Esposito led with six aces of CSI’s 17 overall.  Castellano led defensively with 7 digs.  Ramirez and Cha-Neice Gordon each had four kills each for CCNY, who like Lehman, were plagued by errors, committing 21 overall.

Now on their second two-game winning streak of the season, CSI will look to stay hot.  They will be on the road at Farmingdale State College on Tuesday, September 11, at 7:00 pm in their fourth of a five-game road swing.