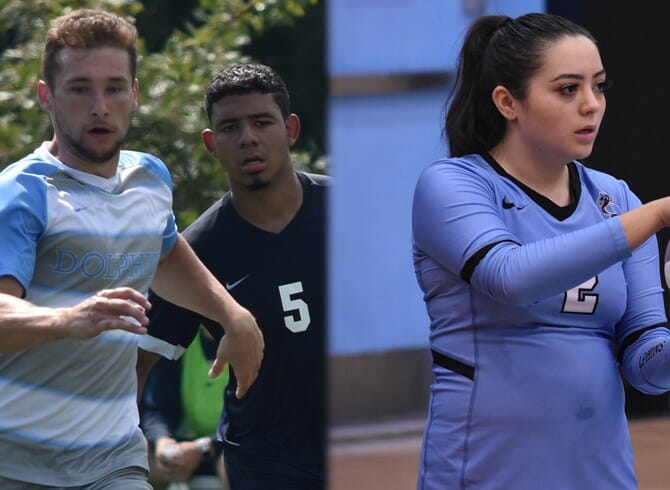 After a single weekend of action, the College of Staten Island is celebrated their first set of honors, as four Dolphins have earned weekly laurels from the City University of New York Athletic Conference.  CSI junior Philip Lefkowitz was named the CUNYAC Men’s Soccer Player of the Week, while Arianna Spears from Women’s Volleyball and Cross-Country runners Spencer Milito and Brittani Broderick were all named Rookie of the Week in their respective sports.

It proved to be quite a weekend for CSI, who won on both Saturday and Monday and are 2-0 to start the season.  Behind the effort was Lefkowitz and his sensational start.  Although Monday’s stats did not factor into the equation, Saturday was enough to earn Lefkowitz the honor.  Against St. Joseph’s of Long Island, Lefkowitz tallied an assist on the Dolphins’ firs goal of the season, and then, in just the seventh minute of the game, he scored what turned out to be the game-winner, as CSi went on to prevail, 3-1.  Lefkowitz finished with a game-high seven shots, four of which were on goal.

For the season, Lefkowitz has a pair of goals and assists and leads the Dolphins with 10 total shots.

Over in the indoor hardwood, Arianna Spears had a great start as well in her collegiate debut for women’s volleyball.  CSI went 2-0 on the weekend, and Spears got right to work as CSI’s setter.  She tallied a team-high 56 assists on the weekend, adding a single kill on 10 attacks and six service aces behind the line, good for third on the squad.  CSI was able to get by St. Joseph’s College (Brooklyn), 3-0, and skate past Cairn University, 3-1.

CSI Men’s & Women’s Cross-Country officially debuted this past Friday at the Ramapo College Invitational held at Deer Path Park in Flemington, New Jersey.  Both sides ran a 5k, and a pair of freshman made early impacts.  On the men’s side, West Babylon native Spencer Milito came in at a time of 17:59, the third fastest 5k time in CSI history, and tops among all Dolphins at the race on Friday.  The result was good enough to place him 43rd in the field of 98 total runners and 33rd among scoring runners.

Fellow freshman Brittani Broderick made her CSI collegiate debut and also impressed, shuffling in at 24:12 in her first race, tops among CSI finishers.  Broderick’s time was 58th among the race’s 94 runners, and 38th among the scorers.