The College of Staten Island women’s tennis team finished off their regular season on Tuesday night, and will now brace themselves for a run at the CUNYAC Postseason title beginning Thursday, at 3:30pm, at the CSI Tennis Center.  Caught in a three-way tie for third place in the CUNYAC standings at 5-3, CSI merited the tourney’s No. 4 seeding due to tiebreaker, and will take on No. 5 City College of New York (5-3) in the first round, which was scheduled to start today but will be moved to Thursday due to rain.

The young Dolphins, which came into the 2011 campaign boasting just two returning players in sophomores Ilona Stoyko and Demi-Jean Martorano, were slow out of the gate this season, falling in four of their first five contests, including a 6-3 affair against CCNY back on September 17.  CSI seemed to right the ship during a six-game homestand from late-September through early-October, where they turned in a 4-2 mark (4-1 against CUNY opponents).  The run included a 6-3 win over No. 3 York College (5-3), and a heartbreaking, 5-4, loss to No. 2 Hunter College (7-1).

Despite the middle-of-the-pack seeding coming into the eight-team tournament, Head Coach Paul Ricciardi is upbeat about the team’s chances heading in.

“We are right where we want to be, “exclaimed Ricciardi.  “We are going to have three tough matches if we expect to win a championship and that’s what we need.  We have some untapped potential in us that I hope will come out with the playoffs.”

CSI has seen positive signs up and down the lineup this season, but the problem, according to Ricciardi, has been the team’s continuity.

“It sounds crazy, but we haven’t had our full strength lineup – one through six – playing together in the same lineup all season for any CUNYAC match,” says Ricciardi, who loses Martorano frequently due to her commitment to soccer, and other players due to classroom commitments and injury.  “I think that is part of having a young team too.  Against weaker opponents we’ve also moved our lineup around, but that will be change in the playoffs and it’s exciting.”

The Dolphins have been grounded by the play of both Stoyko (a four-time CUNYAC Player of the Week Honorable Mention) and dynamic freshman Alena Vedeneeva, who have a combined 17-9 singles record, mainly at first and second position.  Together with freshman Sophia Varriano, the team is very consistent at the top.  The bottom half of the lineup has also proven solid.  Martorano is 5-2 in singles, while first-year player Maryna Icherchera is 4-2 overall with a 3-0 CUNYAC mark, with frosh Jean Baak boasting a 6-4 overall mark.  If CSI turns to their non-participating trio, Katie Masterson, Jacqueline Jamalladine and Faith Avevor have proven dependable, appearing in a combined 21 matches this season, mainly in the Nos. 5-6 spots.

The Dolphins have boasted 18 different doubles pairings this season, as Ricciardi looks for the perfect mesh as the new players come together.  The most consistent pairing has been Stoyko & Vedeneeva, who sport a 4-1 conference mark as a pair.

To get through to the Semifinals on Friday at 4pm at the National Tennis Center, CSI will have to get through the Beavers on Thursday, who defeated CSI, 6-3, earlier in the season.  The Dolphins were forced to concede No. 3 Doubles and No. 6 Singles on that day, but the Beavers still roared from behind after Doubles to win four out of five singles flights, one that included a three-set win by CCNY’s Ayanna Reid over Stoyko, her only CUNYAC loss of the season.

The winner of the CSI/CCNY Quarterfinal will move on to face either No. 1 Brooklyn vs. No. 8 Lehman College.  The other quarterfinals pit No. 2 Hunter College vs. No. 7 John Jay College and No. 3 York College vs. No. 6 Baruch College. 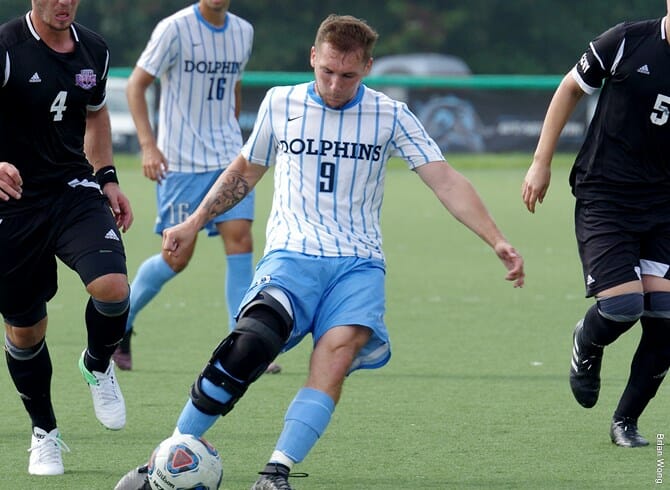