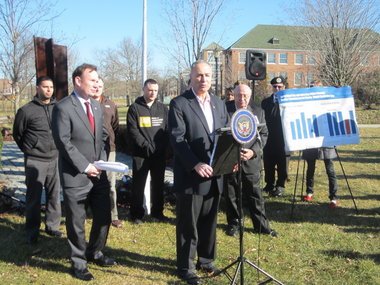 Sen. Charles Schumer, speaking at the College of Staten Island with Borough President James Molinaro and state Assemblyman Michael Cusick (D-Mid-Island), called on the Department of Defense to put soldiers and veterans living on Staten Island and going to college on an equal footing with their counterparts in the other boroughs. Photo and caption courtesy of the Staten Island Advance / SI Live.

STATEN ISLAND ADVANCE – Add the Department of Defense to the long list of agencies that slight Staten Islanders.

Borough veterans in college and active-duty soldiers get thousands of dollars less than their counterparts in New York City’s other four boroughs because an “arbitrary” process put Staten Island into its own funding category, U.S. Sen. Charles Schumer (D-N.Y.) said.

Veterans attending college and active-duty military personnel receive a Basic Allowance for Housing (BAH) to help defray some cost-of-living expenses so that they can better concentrate on their studies and make a smoother transition from soldier to student, said veteran and CSI student David Colon of South Beach.

“A lot of veterans, when they come home and become students, what they have a problem with is work — they wind up having to find two jobs and three jobs because they don’t get that supplemental income that the rest of the city gets,” Colon said. “The whole purpose of the stipend was so veterans would have an easier time acclimating to student life and not having to worry about working a full-time job.”

Using a common military pay grade of E-5 as a comparison, BAH recipients on Staten Island get 42 percent less assistance than those in the other boroughs — that translates to about $900 less per month for housing for veterans in college, according to numbers provided by Schumer’s office.

“When I came to school, this veterans center [on the CSI campus] was just kind of starting up, and these guys help us get registered, they help figure out what classes we need to take, they help guide us and maybe figuring out a major that will help you get a good job in the future,” said veteran and CSI student Lee Siegfried of Huguenot. “I think it’s great that the government will give us money for a basic housing allowance, but there’s no reason that they should fine you — basically, they’re fining these guys $1,300 to $1,500 a month for living on Staten Island.”

The fix can be accomplished administratively by the DoD without having to navigate legislative hurdles, Schumer explained, and he hopes to hear from the department soon.

“The city, the state, the Port Authority, the MTA — Staten Island is equal when it comes to increasing tolls but it’s not equal when they want to take care of our veterans,” said Assemblyman Michael Cusick (D-Mid-Island). “Let’s make sure that Staten Island is treated equal. Last I checked, we’re still part of New York City, and so are our veterans.”

The New York City Housing and Vacancy Survey, conducted every three years by the federal Census Bureau, found that the median Staten Island rent was $900, while the Bronx’s median rent was lower, at $820, and Brooklyn’s median rent was slightly higher, at $919.

“Our veterans are one segment of our population who should never be denied what’s due to them, and our government has a habit of doing that,” said Borough President James Molinaro.

This story was originally published in the Staten Island Advance and on SILive.com on Saturday, February 04, 2012, and is reprinted here with permission. 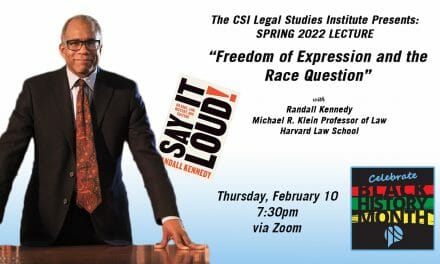