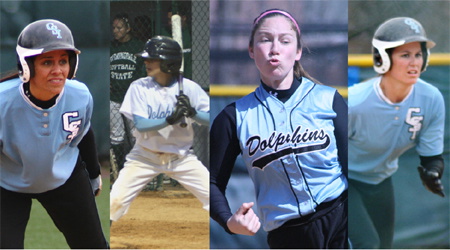 The CUNY Athletic Conference has named their Softball All-Stars for the Spring 2012 season. The College of Staten Island has swept the three title honors; Kaitlyn Flynn earned Player of the Year, Danielle Ponsiglione was honored with Pitcher of the Year and Brittany Smith won Rookie of the Year. Senior Kristi Dillon was named to the First Team All-Stars.

Flynn, who is earning this honor for the second year in a row and won Rookie of the Year in her freshman year, has been nothing shy of outstanding for the Dolphins. She boasts a .500 batting average that shines with 58 hits including 8 doubles, seven triples and three homeruns. She totaled 35 RBI’s with 89 total bases and 33 runs scored. In her four years she leaves behind a legacy as CSI’s all-time career leader in hits and RBI’s with a total of 190 and 130, respectively.

Earning Pitcher of the Year for the third consecutive season, Ponsiglione led the Dolphins to another successful season. She finished the season with a 10-3 record with 12 complete games. She totaled 51 strikeouts in 88.1 innings. Ponsiglione holds the number one spot in numerous CSI career records including wins with 54, complete games with 77 and innings pitched with 536.

Smith had a triumphant first year with the Dolphins. Her .456 batting average was centered on 57 hits, seven doubles and an in the park homerun. She tallied 62 total bases with 44 runs scored. Smith led the team and the conference in stolen bases with 35, a CSI single season record.

The CSI right fielder, Dillon, did a fine post in her senior year. As the Dolphins lead off batter, she totaled 38 hits and did her job of getting on base with 47 total bases and 23 runs scored. Her 15 stolen bases this season helped her for a grand total of 58 which is the second best in school history for a career.

Despite losing to Baruch in the CUNAYC Championship game, the Dolphins had a great season, finishing as the #1 seed in the playoffs with an 11-1 conference record.