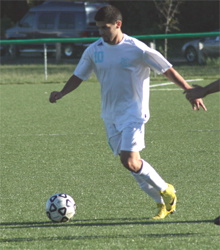 The College of Staten Island got off to a flying start on Friday, scoring a late first-half goal and then tallying an insurance marker in the second frame, to score a 2-0, non-conference win over Benedictine University at the CSI Soccer Complex as part of the Inaugural Fall Classic at the College.  The win was the first ever for Head Coach John Tardy, who made his collegiate debut this afternoon.  CSI extends to 1-0 this season, while the Eagles fell to 0-1.

In a back-and-forth game that featured a lot of quick shots at the goal and sustained possession by both teams, it was the Dolphins that enjoyed a 9-5 advantage in shots.  The host squad, however, couldn’t seem to get on target, as only a single shot was placed on goal by the Dolphins in the first 44 minutes.  That changed, however, with 18 seconds remaining.

After a Michele Kissi shot was blocked, a fouled was whistled against the Eagles for a foul outside the box.  With the clock winding down, junior Lirim Begai spotted the ball and launched a rocket passed BU keeper Zorohn Reed to make the score, 1-0.  That gave the Dolphins the momentum at the break, despite an even 2-2 mark in shots on goal.

BU raced feverishly to get an equalizer in the second frame, and scattered 9 shots at the CSI net, with Julio Lopez pacing the way with three of his own, including two on goal.  The Dolphins, however, with Ahmed El-Ghareib in net, were able to weather the storm long enough to punch in another tally.

With just under 15 minutes remaining, junior Nedgy Nazon threaded in a pass to Betsam Sosa, who blasted a long shot from the right of the goal to give CSI a commanding 2-0 edge.

CSI retaining the 2-0 edge was even more impressive given that just over a minute later, El-Ghareib turned back a penalty shot from BU’s Eric Selke.  Joe Yarshen then blasted another shot on El-Ghareib off the rebound and another save was made, preserving the shutout.  Later in the frame, Bryin Venegas hit the post with 30 ticks remaining, ending a frustrating afternoon for the Eagles.