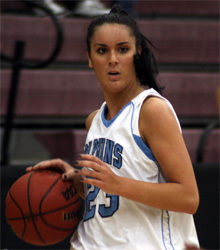 The College of Staten Island women’s basketball team fell in its season opener today, suffering a 62-49 loss to Mount Saint Mary College in the opening round of the Emerson College Tip-Off Tournament in Boston, Massachusetts.  The Dolphins, who trailed from start to finish, will fall to 0-1, while the Knights lifted their mark to 1-0.  CSI will play Green Mountain College tomorrow afternoon in the Consolation Round of the Tournament, at 1pm, while the Knights will meet up with host Emerson in the Championship half of the bracket at 3pm.

The Dolphins were forced to battle for most of the way, not connecting on their first field goal until almost the eighth minute of the game, as MSM opened up a 13-1 lead.  Neither team could find their shooting touch in the frame, as the Knights connected on just over 30% of the first half shots, while the Dolphins were a chilly 5-for-30 (17%) from the floor.  Despite falling behind by as many as 13 markers, CSI was able to chip away, and a pair of free-throws at the break by Nikki Fabozzi trimmed the deficit to just eight points at the break, 27-19.

Points were at a premium in the first half, and the same was true for the opening minutes of the second half.  The teams exchanged turnovers on their first three possessions before CSI caught a bit of fire, going on a modest 8-2 run to come to within only three points, 29-26, with just over 15 minutes to play.  The Knights, who finished 25-4 and as Skyline Conference champions a year ago, did respond to the call.  Aided by three straight CSI fouls and a pair of offensive rebounds, Lauren Romao made the Dolphins pay with a three-point goal, and that sparked a 9-0 MSM run that gave the Knights another comfortable 38-26 cushion.

From there, CSI was able to chip away, coming to within nine points on a couple of possessions, but foul trouble chased Adriane Reyes and Lisa Galasso out of the game for CSI and dominance on the offensive glass by the Knights continued to keep the Dolphins at bay.  MSM opened up a 16 point lead on two occasions before finally settling in for the hard-fought, 62-49 final.

Fabozzi finished with a team leading 13 points and 10 rebounds for the Dolphins, while Galasso finished with 10 points.  MSM’s Rachel Perrone led all scorers with 15 points, adding 9 rebounds.  MSM out-rebounded CSI, 51-31, including a 23-14 advantage on the offensive glass.

In the opening game of the tourney, host Emerson whizzed by Green Mountain, 88-56.