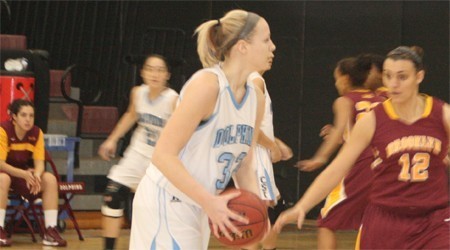 The College of Staten Island women’s basketball team pounced on visiting Medgar Evers College early, then never looked back, coasting to a 68-15 final today at the Sports & Recreation Center as part of CUNYAC play. The Dolphins, winners of two straight, improved to 8-6 overall and 5-1 in the conference, while the Cougars fell to 0-14, 0-6, respectively.

CSI scored the first seven points of the contest, and after MEC recorded their first bucket at 17:43, the Dolphins rolled out another 22-0 run over the next seven minutes. The run featured a pair of jumpers from both Melanie Johnson and Olivia Tierno, setting the stage for what would be a 44-8 halftime score. CSI would empty its bench in the effort, and Jennifer Coughlan shined in the first stanza, netting 11 points and nine rebounds in 14 minutes. In one of the only dampers of the game, CSI would lose Coughlan early in the second half due to injury.

Meanwhile, in the second frame, CSI raced out to a 14-0 run, and with a padded lead did their best to exercise their half-court offense, using most of the shot clock on each possession, forcing 34 Cougars turnovers on the other side of the floor.

CSI, which shot41% for the game, were led by Tierno’s 15 points, while Johnson and Coughlan each finished with 11. Adriane Reyes led the unit with 10 rebounds. MEC was led by Nia Tompkins’ six markers, while Jaquay Lanot scored seven rebounds.

CSI is back in action on Monday to face Ramapo College in a non-conference test at the Sports & Recreation Center at 6pm.