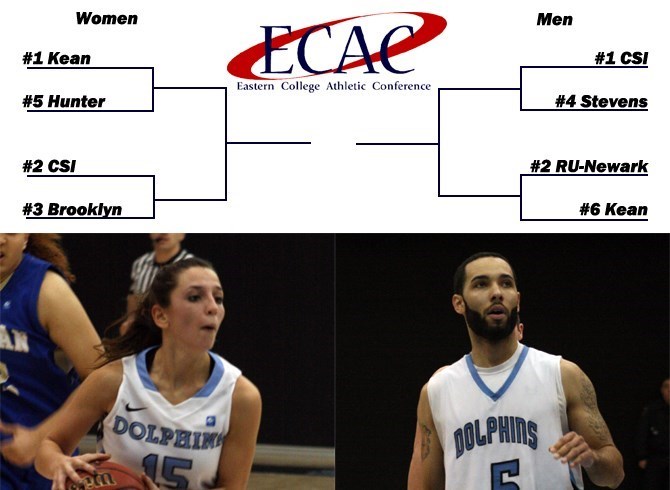 The College of Staten Island will have plenty of basketball on tap this weekend, as the Sports and Recreation Center will play host to six contests featuring some the area’s best teams jockeying for the ECAC Metro NY/NJ Basketball Postseason Championship.  The Semifinal round will kick off on Saturday afternoon and will extend into the evening, and on Sunday, the semifinal winners will advance to the Championships, all hosted at CSI.

The men will tip off first on Saturday.  At 12 Noon, No. 6 Kean University, which scored an upset over No. 3 Mount Saint Mary College on Wednesday, will take on No. 2 Rutgers-Newark in a contest pitting together two New Jersey Athletic Conference schools.  The two teams split their regular season series this year, with both games decided by less than five points.  In the other semifinal, at 2pm, host and top seed College of Staten Island will take on No. 4 Stevens Institute of Technology.  It will be the first meeting between the two sides since the 2011-12 season, when CSI took their first win over the Ducks since 2002.  SIT leads the all-time series, 6-2, and defeated the Dolphins in their only other ECAC tourney meeting, in 2008.

With a short breather in between, the women’s semifinal round then gets started at 5pm at the Sports & Recreation Center on Saturday.  In the first contest, No. 5 Hunter College will take on No. 1 Kean University.  The second contest, at 7pm, features a CUNYAC showdown between No. 3 Brooklyn College and No. 2 CSI.  CSI took both regular season meetings this year, with the game in Staten Island coming down to overtime, making for what should be an exciting third meeting between the two sides.

The four semifinal game winners will be right back in action on Sunday evening for the Championship games.  The women’s championship will be played at 5:30pm, followed by the men’s Final at 7:30pm.  CSI is the host school regardless of whether the Dolphins advance.

Tickets for all legs of the ECAC Tournament are FREE, and the games are CLUE Certified (PG) for all CSI students.  If you can’t make it to the game, you can follow the action live via the radio and webcasting calls through WSIA and CSI SportsNet.  WSIA is available locally at 88.9FM and www.wsia.fm and CSI SportsNet is available at www.csidolphins.com/live.