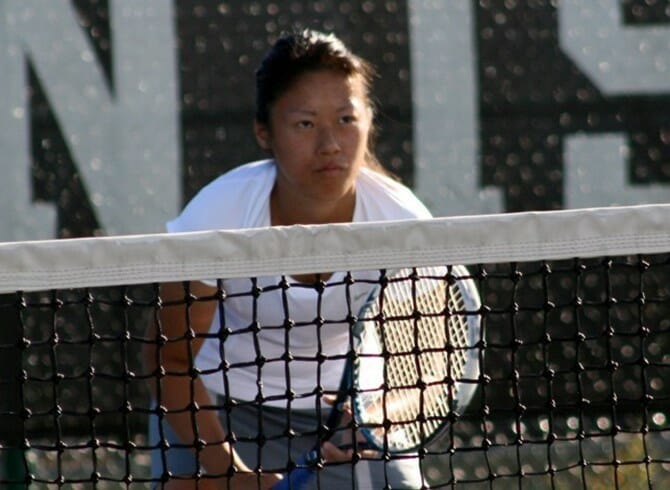 In what was the first-ever NCAA-tournament appearance, the College of Staten Island’s run to a national title was short-lives, as the DOlphins gave great effort but fell short to Ithaca by a 5-0 count. The second matchup of the first round of the NCAA women’s tennis tournament was held outdoors at the Torrence M. Hunt ’44 Tennis Facility on the campus of Williams College with the previously forecasted rain holding off long enough for the match to be played to completion. The Bombers moved to 14-6 overall with the win and will move on to face host Williams tomorrow, while the Dolphins fell to 17-4.
The Bombers raced out to a strong start by notching all three doubles points. The Bomber duo of Cristina Nunez and Alyssa Steinweis were first off the courts at one-doubles, as they eased past the Dolphin team of Sabrina Bragerton-Nasert and Nozima Toshpulatova 8-2, before courts three and two followed in quick succession, as the other two pairs of Bombers posted the same scoreline in their respective wins. Jean Baak linked up with Madiha Mulla at No. 2 Doubles, as did Michelle Kushnir and Jacqueline Jamaleddine in the No. 3 spot.
It was more of the same in the singles portion, as the Bombers got out off to quick starts, leaving the Dolphins with little opportunity to recover and keep the score close. With their 3-0 lead in hand, the Bombers found their remaining two points from Nunez and Haley Kusak at one- and two-singles respectively. Nunez blanked Bragerton-Nasert to pull the Bombers within one point of clinching their place in the second round, and then Kusak only dropped two games to Toshpulatova, clinching the match 6-2, 6-0.
The Bombers book their place in the second round, which will be held tomorrow on the campus of Williams College, where they play the hosts, who are the six-time defending NCAA champions. The match is set to start at 2 PM EDT.
Ithaca College 5, Staten Island 0
Match Notes:
Ithaca 14-6
Staten Island 17-4
Order of Finish: Doubles (1, 3, 2); Singles (1, 2)
– story courtesy of Williams College Sports Information