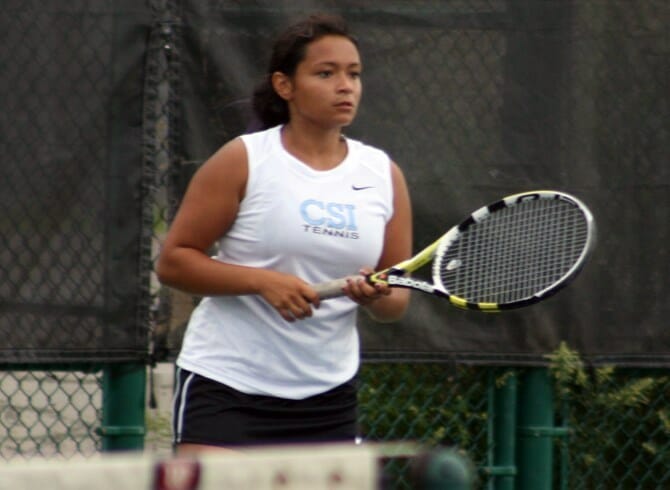 For the first time since 2000, the College of Staten Island women’s tennis team will be entering the CUNYAC Postseason Championship Tournament looking to defend a championship, and the reigning title holders will open up play as the conference’s No. 2 seed, hosting No. 7 York College on Sunday to open up quarterfinal play.  Match time is set for 1pm at the CSI Tennis Center on Sunday.  The remainder of the tournament will be played at National Tennis Center during the week ahead.

CSI finished 5-1 in the CUNYAC standings.  The finish was good enough to tie Hunter College for first place in the CUNYAC standings, but the Hawks’ 7-2 win over the Dolphins during the regular season earned them the tie-break in the seeding, hence CSI’s No. 2 overall position.  The draw will pit them against No. 7 York College in the CUNYAC Quarterfinals.  CSI will enter as a heavy favorite, having beaten the Cardinals, 7-2, during the regular season in Jamaica, NY.  The two points that CSI conceded in that match were due to defaults, as the Dolphins went in with an incomplete lineup.

Because the CUNYAC boasts only seven squads in women’s tennis, No. 1 seeded Hunter College earned a first round bye, and will advance straight into semifinal play.  In other quarterfinal matches, No. 3 Brooklyn College will face off against No. 6 Lehman College, and No. 4 Baruch College will square off against No. 5 John Jay College.  The four winning teams will then meet again on Wednesday, October 22, at 5pm at the National Tennis Center for semifinal play, with the two finalists playing for the title next Sunday, October 26, at 4pm at the same venue.

The Dolphins defeated Brooklyn last year in the championship, 5-4, to earn their first title since 1999, breaking Hunter’s string of 13-straight CUNYAC titles.  The Hawks and Bulldogs bookend the Dolphins at the top of the table and promise to make it a memorable tournament run.  First year head coach Arthur Velnik will lead his troops into the foray after an 8-3 regular season, and with a formidable lineup that is light on numbers but not short on talent.  Captain Sabrina Bragerton-Nasert has had an MVP-type season, boasting an incredible 10-1 singles and 11-0 doubles record in 2014.  Her doubles partner, Madiha Mulla, is sporting a 9-1 singles and 10-1 doubles mark.  In the top spot, Nozima Toshpulatova is 6-2 in singles play, which includes a 5-1 CUNYAC mark.  No. 5 singles player Michelle Kushnir is also in the midst of an all-star season, boasting an 8-2 singles mark.  Rookie Aziza Jurabaeva is also hitting her stride, winning her last four singles matches in the No. 3 position entering the tournament.

Admissions to all legs of this year’s tournament are free for all fans.  Tickets are free but will be required for admission to the semifinal and final rounds at NTC, and can be obtained HERE.