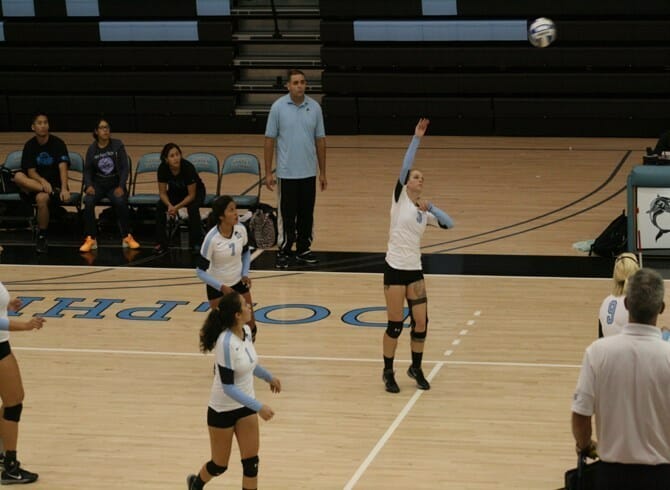 The College of Staten Island, owners of the No. 6 seed in the CUNYAC Postseason Women’s Volleyball Tournament, saw their season officially come to a close this evening, falling to No. 3 Lehman College, 3-0, as part of quarterfinal play at The Apex in the Bronx, NY.  Lehman won by scores of 25-18, 25-20, and 25-20. For the Dolphins it marked the official end to their season at 11-14, while the Lightning, 13-13 overall, will move on to the Semifinal round of play on Friday.

CSI did have their fair share of chances despite the straight-set loss.  In the opening set, CSI had a few modest leads early before a Julia Mercado error tied the score at 13-13.  Things, however, turned from there.  A couple of Cari English kills and a tough patch of play that saw CSI commit four attack errors gave Lehman a 7-0 run and a 20-13 lead, putting them on their way to a win.

A Siobhan Granich early kill in the second frame, helped CSI to an early, 3-2, lead, and further along, CSI cut a LC lead to 8-7 on a Jonaldy Edouard kill, but again the Lightning made a run, this time 6-3, aided by four English kills to jump out on top, 14-10.  CSI stayed within striking distance, and another kill by Edouard made in 19-18 in LC’s favor, but the Dolphins could not sustain the momentum, as LC went on another 4-0 run to force CSI into a timeout at 23-18, and Lehman ended up scoring another pair to win, 25-20.

Like the first set, CSI seemed on their way to a good result early on.  Four-straight points, guided by three CSI kills gave the visitors a 4-2 lead, and later, an 8-0 run by the Dolphins gave them a 13-9 lead, powered by two Granich aces and a Vanessa Reyes kill.  Again Lehman countered but even late the game was knotted at 17-17.  In a recurring theme, Lehman extended their game late, and this time, the home squad went on a 5-1 spurt on three English kills to grab a controlling 22-18 lead.  Another kill by English and then an attack error by CSI ended the match, and the Dolphins’ season.

Leading the way for Lehman was English, who clocked in 22 kills on 36 attempts for an amazing .611 hitting percentage, while adding 12 digs.  Julia Mercado posted 9 kills and a team high 16 digs.  For CSI, leading the way was Granich’s seven kills and four service aces.  Reyes led the way with 16 digs.  In her final game as a Dolphin, lone senior Pola Poskrobko finished with three kills and a pair of blocks.