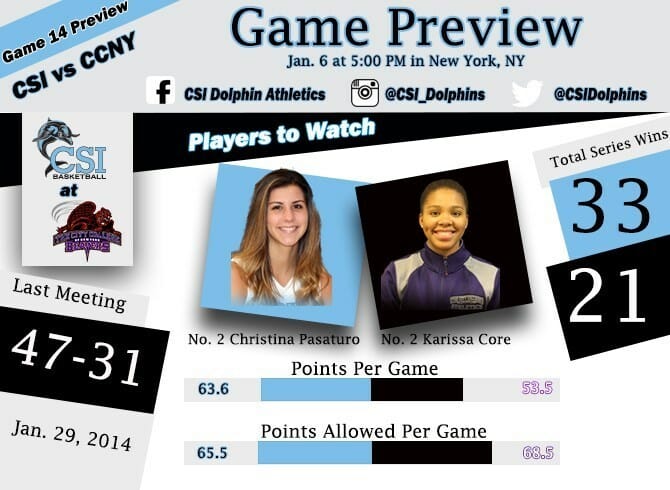 The College of Staten Island women’s basketball team is back in action tonight against City College of New York at 5:00 PM at the Nat Holman Gymnasium in New York, NY.  The Dolphins have won the last 24 meetings against the Beavers and lead the all-time series 33-21.

The Beavers come into tonight’s home game on a four game losing streak capped off by a 85-58 loss to CUNYAC opponents Lehman College. Karissa Cole is the Beavers’ leading scorer with 10.7 points per game and will need all of those points to keep her team in the game tonight.  CCNY is averaging 54 points per game while allowing opposing teams to score an average of 69.  The Beavers will hope to be able to limit the Dolphins scorers and break their four game losing streak.

The Dolphins take to the road on a three game losing streak with hopes that they can put a stop to that tonight.  Freshman forward, Christina Pasaturo will once again lead the Dolphin charge with help from Victoria Crea, and Victoria Gallinaro running the point.  Nikki Fabozzi will look to crash the boards and keep the Beavers’ second chances to a minimum while attacking the boards on the offensive side to help break the Dolphins losing streak.

Fans, if you are unable to make the trip to the game tonight you can follow along at www.csidolphins.com/watch for live video and audio.