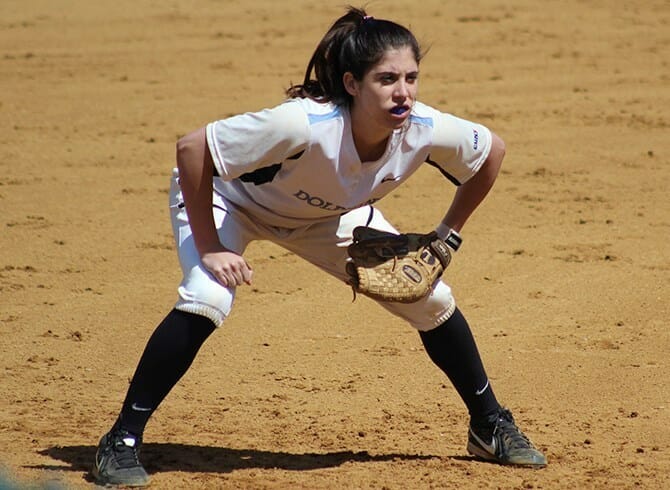 The College of Staten Island had their unbeaten CUNYAC streak that stretched all the way back to the 2013 season broken this afternoon as the Hawks of Hunter College were able to come into Dolphin territory and steal a win away from the Dolphins. Hunter College took game one, 7-5, however, the Dolphins came out and game two and proved why they have been undefeated for so long and beat the Hawks, 7-1.  With the split the Dolphins move to, 13-5, overall and, 3-1, in the CUNYAC while Hunter goes to, 11-2, overall and, 7-1, in the CUNYAC.

The Dolphins came out looking flat in game one, as they haven’t been able to play their scheduled games in four days due to bad weather.  Both teams only scored one run through three innings which made it seem as though this game would be a pitcher’s duel.

The Dolphins responded to Hunters run in the second when Chyanne Gilliam crushed a homerun over the right center wall as she would not allow the Dolphins to go scoreless for a second straight inning.  Staten Island could have really poured it on in the second inning as they were able to load the bases with no outs but were unable to bring anyone home as the next three batters were unable to get the ball into the outfield.

Jacqueline Cautela who started the game for the Dolphins in the circle had the game under control up until the fourth inning where she had two outs with runners on second and third and a full count Aleta Terill hit a two RBI single to right center which scored both runners.  Staten Island could have gotten out of the inning with just two runs on them but an error by Maxine Jasko allowed the inning to continue and consequently allowed the Hawks to score another run.

Staten Island was able to match whatever Hunter College did and the Dolphins did so in the fourth inning by scoring four runs which was spear headed by Jasko who hit a double to right center a common are for double in today’s game as wind gusts would pull the ball away from the field making it difficult for outfielders to get a track on the ball.  Danielle Locke was 2-for-4 in game one with an RBI that came in this inning when Locke went against the grain and hit a double to left field to bring in Jasko.  Christina Tufano was able to hit a deep single but tried to stretch it to a double and was thrown out but not before two runs scored.

CSI was held scoreless the rest of the game while the Hawks would go on to score three more runs and break the hold that Staten Island had over the CUNYAC since 2013.

Nicolette Trapani had another great outing in game two.  Coming off of their loss in game one the Dolphins came out with authority in game two. After going scoreless in the first inning the Dolphins would score a run in the second and third inning while Trapani made sure the wind wasn’t a factor for her outfielders as she either struck the batter out or made them hit ground balls and held Hunter scoreless for four innings.

The Dolphins’ fielding woes would continue in game two as they would go on to commit three errors, two fielding and one dropped foul ball. Tufano showed why she was CUNYAC player of the Year last year as she went 3-for-3 in game two with four RBIs, one run, and a home run to right center.  The Dolphins added to their lead this inning and go on to score three runs followed by two more in the sixth.

Hunter managed to score a run in the fifth when Terill walked and advanced all the way to third on a sac bunt and eventually brought home by a single up the middle.
The Dolphins are back in action tomorrow as they head to Jamaica, NY to take on York College in yet another CUNYAC doubleheader.