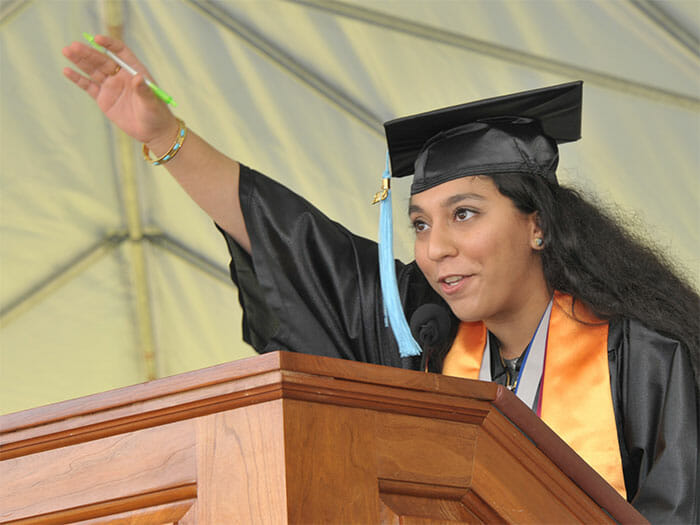 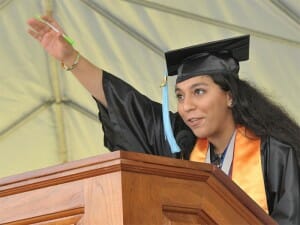 The cloudy skies over the sixty-sixth Commencement at the College of Staten Island on the morning of May 28 did not darken the joyous mood of the 2,631 graduates, their families and friends, and College faculty and staff as they gathered on the Great Lawn of CSI’s Willowbrook campus.

After opening remarks by Provost and Senior Vice President for Academic Affairs Dr. Fred Naider, President William J. Fritz came to the lectern. He began his remarks by emphasizing CSI’s great legacy, which was built upon the impressive achievements of the students, faculty, and staff at CSI’s predecessor institutions, Staten Island Community College (SICC) and Richmond College. Then, after an audio clip of Charlotte Eldred (née Montalbano, who passed away in 2013 at the age of 75), one of the first graduates from SICC, speaking at that institution’s first Commencement in 1958, he went on to outline Charlotte’s remarkable journey through life as a dedicated, accomplished, and award-winning teacher, as well as a published writer.

“Charlotte’s life shows us that the noble mission of The City University of New York and the College of Staten Island has endured for almost six decades, a mission that promises full access to quality higher education, the pursuit of academic excellence, and the opportunity to give back,” Dr. Fritz said.

Dr. Fritz noted that the mission lives on in students like Kawsar Ibrahim, 2015 Valedictorian with the Macaulay Honors College at CSI, who will be starting medical school in the fall, and who “ is already making this world a better place, having served abroad in Panama last summer with the Global Medical Brigades to bring medical and dental healthcare and education to people in need.”

Another example of the continuing mission is junior Sean Thatcher, who, in 2009, became quadriplegic from an accident that injured his spinal cord. “Through it all, through all of the challenges and obstacles before him, Sean is here today,” Dr. Fritz commented. “And just recently, Sean was awarded the Goldwater Scholarship, the nation’s premiere academic award for undergraduates majoring in math, science and engineering.”

“You have always had the ability to dream,” he told the graduates. “The College of Staten Island has now given you the power to achieve those dreams, the power to change the world.”

This year’s ceremony also bestowed the honorary degree of Doctor of Humane Letters on Sally W. Williams, a community activist, founding and current member of the College of Staten Island Foundation (and past President), and daughter of Dr. Arleigh B. Williamson one of the founders of SICC and Richmond College.

[youtube]http://www.youtube.com/watch?v=DErInMnv8Eg[/youtube]Later in the ceremony, this year’s valedictorian, Kawsar Ibrahim, told the story of how here doctor tried to discourage her from following in his footsteps because she was a woman of Middle Eastern descent, and how that advice only strengthened her determination to become a doctor and help others. After mentioning the many research, volunteer, and mentoring opportunities that CSI offered her, and discussing her time as a medical volunteer in Panama, she proudly told the audience, “Now that I will be starting medical school at The New York College of Podiatric Medicine this fall, it seems that the door my doctor tried to close had something stuck in its way: me.”

Before closing by thanking CSI faculty and staff, her family, and her classmates, Ibrahim urged her fellow grads to always follow their dreams and persevere in the face of obstacles.

Near the conclusion of this year’s Commencement, Dr. Fritz recognized 87-year-old Rose Zrake, who was graduating with a Bachelor of Arts degree in English Literature.

In the afternoon, the tradition of honoring exceptional CSI faculty, staff, and students continued with the Annual Dolphin Awards ceremony.

Visit the CSI Today Dolphin Awards Photo Gallery in order to read the individual biographies of the outstanding honorees for 2015.

-Outstanding Scholarly Achievement by a Member of the Full-Time Faculty: Deborah Popper

-Outstanding Teaching by a Member of the Full-Time Faculty: Sondra Brandler

-Outstanding Service and Contribution to the College by a Member of the Full-Time Faculty: Gordon DiPaolo

-Outstanding Teaching by a Member of the Adjunct Faculty: Anthony Romano

-Outstanding Service and Contribution to the College by a Member of the Non-Teaching Instructional Staff in HEO Title: Lillian McGinn

-Outstanding Service and Contribution to the College by a Member of the Non-Instructional Staff in CLT and OIT Specialists Title: Gabriel Cynowicz

-Outstanding Service and Contribution to the College by a Member of the Non-Instructional Staff: Elaine Rocco

-Outstanding Service and Contribution to the College by a Member of the Non-Instructional Staff in Maintenance, Operations, Security: Lucy Tirado

-Outstanding Service and Contribution to the College by a Member of the Part-Time, Non-Teaching Staff: Donna Sipp

-Outstanding Service and Contribution to the College by a Currently Enrolled Student: Erica Golin

President Fritz opened the ceremony by pointing to the significance of the Dolphin Awards. “It is first our moment following commencement to finally take a deep breath and exhale, to reflect on all that we accomplished, and to celebrate the contributions of our faculty, staff, and students.” He also further discussed the College’s legacy, using an excerpt from Charlotte Eldred’s speech to build a bridge from CSI’s rich past to its bright and promising future.

College Writer/Editor Terry Mares followed Dr. Fritz, reading short biographies of each of the honorees, celebrating their contributions to the College.