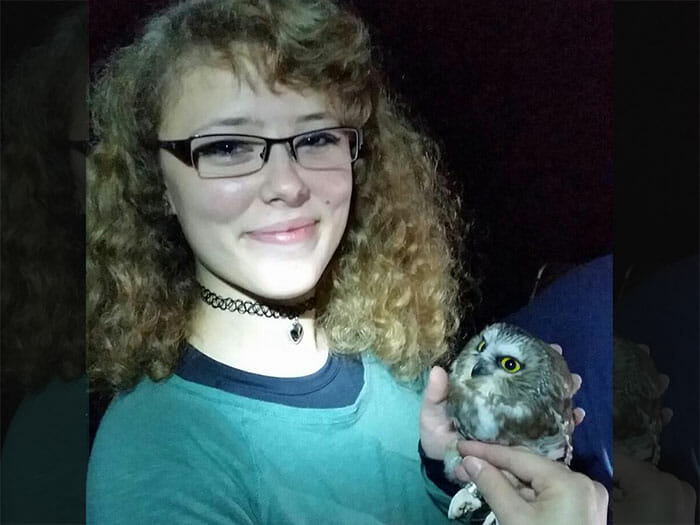 Lucinda, a Macaulay Honors College student, has been conducting research with Dr. Richard Veit on vagrancy and population dynamics of migratory birds.

“I have [also] had the privilege of working with, and learning from, Dr. Ralf Peetz of the Center for Engineered Polymeric Materials, Dr. Shaibal Mitra of the Biology Department, and Dr. William Wallace of the Center for Environmental Science,” adds Lucinda.

[youtube]http://www.youtube.com/watch?v=KFhLcZ0piCU[/youtube] She is currently working on four publications related to her research, including “Duration of stopover in relation to date of arrival in vagrant Western Kingbirds.” She has presented her research at numerous conferences, and recently presented her work on Western Kingbirds at the National Conference of Undergraduate Research in Spokane, Washington this April.

Lucinda has been awarded the College of Staten Island Undergraduate Research Stipend two years in a row for her research, as well as an honorable mention from the Barry M. Goldwater Scholarship in 2014.

During her undergraduate career, she has often traveled to conduct research.  Lucinda studied contemporary British drama in London during the summer of 2012, participated in an archaeological dig at the coastal erosion site of the Knowe of Swandro in Rousay, Scotland, during the summer of 2013, and learned about tropical ecosystems through a tropical ecology course in St. John, US Virgin Islands, this past winter. She continues her research fieldwork of banding birds in Sandy Hook, New Jersey, and Nantucket, Massachusetts.

In the summer of 2015, Lucinda will continue to conduct research with Dr. Richard Veit at Tuckernuck Island, Massachusetts, studying gull diet, and assisting in the banding of birds at two Monitoring Avian Productivity and Survivorship (MAPS) banding stations. She has plans to attend graduate school to obtain her PhD in ornithology to pursue her dream of becoming an ornithologist, and conducting research on vagrant birds.

“The Macaulay Honors College at the College of Staten Island has provided me with a unique educational experience that I would not have received elsewhere,” Lucinda reflects, adding “thanks to our esteemed faculty and small class sizes, I had the chance to form meaningful relationships with my professors, which has led to great research opportunities.”