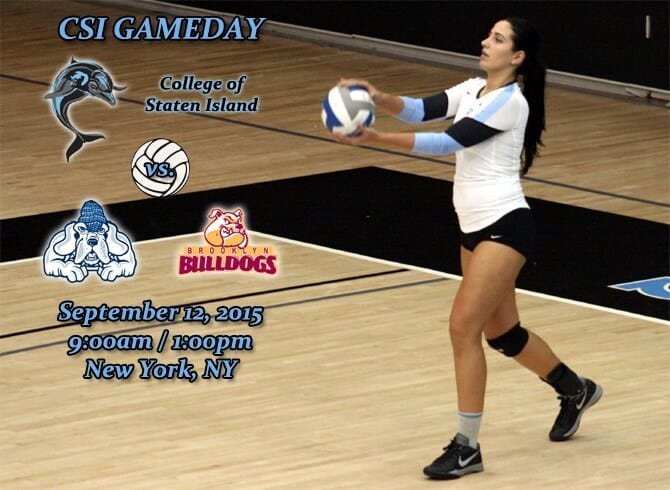 The College of Staten Island women’s volleyball team is riding a modest two-game win streak going into their conference opener this morning, as they travel to City College of New York to take on a pair of CUNYAC opponents.  First, CSI will go up against John Jay College at 9am, and following a break, CSI will resume action at 1pm against Brooklyn College.

CSI vs. JOHN JAY / BROOKLYN AT-A-GLANCE
Matchup:  CSI (2-1 overall, 0-0 CUNYAC) vs. John Jay College (2-2 Overall, 0-0 CUNYAC) / vs. Brooklyn College (1-3 overall, 0-0 CUNYAC)
Where:  Nat Holman Gymnasium, 160 Convent Avenue, New York, NY
First Serve: 9:00am vs. John Jay / 1:00pm vs. Brooklyn
All-Time Series:  CSI leads JJC, 7-6  /  Brooklyn leads CSI, 7-6
Last Year’s Result:  CSI defeated John Jay, 3-0 / Brooklyn defeated CSI, 3-0
Players To Watch (CSI):  Brittany Minondo is on a tear, coming off an 11-ace performance against Purchase State.  She leads CSI with 20 aces this season.  Victoria Wong leads a balanced defensive front, leading the team with 31 total digs.
Players to Watch (JJC):  Rachel Eng has been the primary attacker for JJC this season, posting 19 kills on a team-high 88 attempts.  She also leads the squad in defensive digs with 33 through four games.
Players to Watch (BC):  Christolia Butler has been off to a good start, posting 17 kills on a team best .110 hitting percentage.  Brooklyn is among the CUNYAC leaders in digs with 192, led by Francesca LoCascio’s 35.
News and Notes:  This is the CUNYAC season-opener for all three teams. All three teams are coming off wins.  John Jay is on a two-game streak, having beaten Old Westbury and Farmingdale State. Brooklyn is coming off their first win of the season, a 3-0 winner over Pratt Institute.