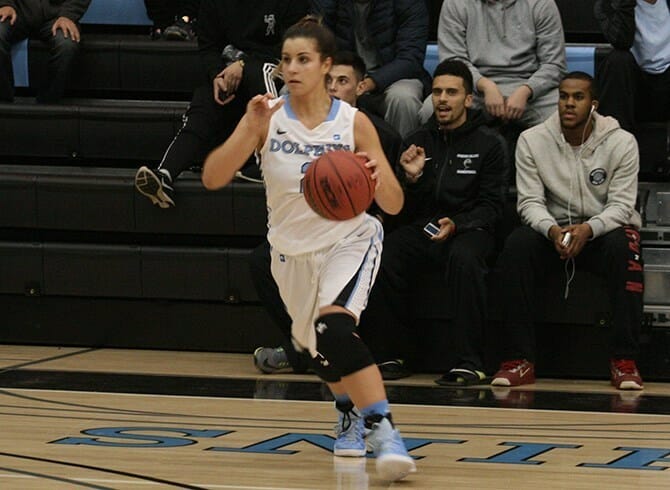 Another week, another top rookie honor for College of Staten Island women’s basketball freshman Christina Pasaturo.  The Dolphins guard was cited as the CUNYAC Rookie of the Week for last week, after a busy three-game swing.  For Pasaturo, it is her second honor in as many weeks to open the 2014-15 campaign.

Pasaturo’s week started against New York University on November 19.  The Dolphins fell to the Violets, but Pasaturo canned four three-pointers in the loss, finalizing with 12 points and a pair of rebounds.  Three days later, Pasaturo tied for the team-lead with 14 points against PSU-Harrisburg, adding a rebound and a pair of steals.  CSI picked up a win in their final game of the week against Rosemont College, and Pasaturo was a force, collecting a team-high 18 points and 9 rebounds in the win, including a pair of pair of critical free-throws that helped ice the game for CSI.

CSI is currently 3-3 this season, and Pasaturo leads the team with a robust 14.8 points per game and shares the team lead in total assists with 13.  She is second on the squad in rebounds, collecting 35, for an average of 5.8 per game and also in steals with 9.

The Dolphins are back in action on Wednesday, December 3, when they host Western Connecticut State in non-conference play at 7pm at the Sports & Recreation Center.