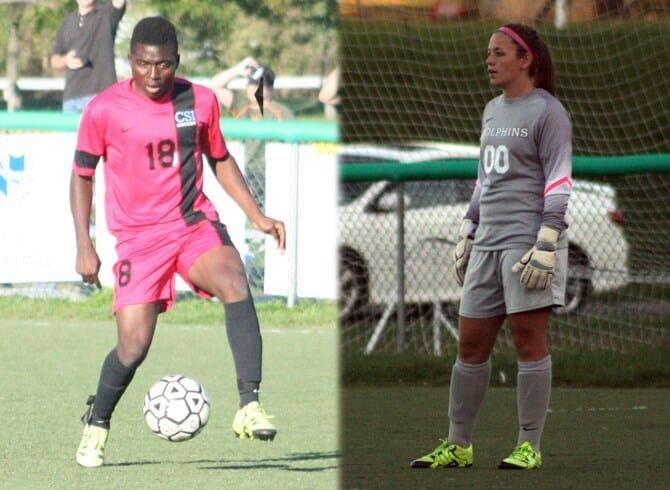 The College of Staten Island men’s and women’s soccer squads are streaking heading towards the postseason, and both teams received good tidings in the form of weekly award citations from the City University of New York Athletic Conference. The CUNYAC named Emmanuel Agboola its Rookie of the Week on the men’s side, while senior goalkeeper Kristy Colangelo was named the conference’s Defensive Player of the Week on the women’s side.

The men’s unit played in a lone contest a week ago, turning back Berkeley College (NJ), 2-1, in their final regular season home game. Agboola was instrumental to the cause, scoring a pair of key assists on the goals that helped aid CSI to victory. First, Agboola threaded a through-ball in to Brayan Evo that opened up the scoring with under 15 minutes to play. Then, just 21 seconds later, Agboola struck again when he unselfishly posted a low cross into Tarek Emam that the fellow freshman punched in to give CSI a 2-0 lead. CSI would hold on from there to record the win and stay unbeaten for the 9th-straight game.

For the season, Agboola has posted a lone goal to go with a team-high four assists. He is tied for fifth on the squad with 19 shots. The CSI men’s team is back in action on Wednesday, when they travel to Randall’s Island to take on Hunter College in their CUNYAC finale.

On the women’s side the Dolphins are on a six-game unbeaten streak, and that continued with a 2-1 win over St. Joseph’s College (LI) and a scoreless tie against Brooklyn College. Colangelo was a central figure in both games. Against the Eagles the senior made a healthy 10 saves as CSI scored a big road win. She surrendered the lone goal in the second half of that game, but rebounded to make five saves to preserve the win. Three days later, Colangelo recorded her seventh shutout of the season, making four saves in the 0-0 tie.

The CSI women are 10-2-1 this season and will next play host to William Paterson University at the CSI Soccer Complex on Tuesday, October 20.