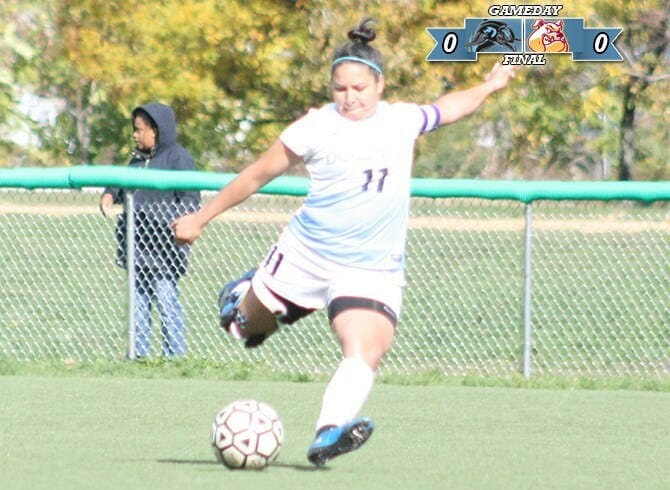 The Dolphins uncorked 18 shots in today’s game and were able to put one in the back of the net as none of the shots really threatened goal keeper Rebecca Harmata. Out of the 18 shots the Dolphins had two really good opportunities, one which was shot by Danielle Smith at an open goal which was saved off the line by Jasmine Fermin. The second was a cross in by Samantha Wysokowski which found the head of Kathryn Dowling but was able to turn it towards goal.

Fermin kept the Bulldogs’ backline stout, cleaning up anything that got passed one of her teammates to help keep the Dolphins on the board.

Kristy Colangelo recorded her seventh shutout of the season which puts her one behind the leader Victoria Donegan for most shutouts in a season.

The Dolphins’ offense looked sluggish on the pitch today, unable to connect passes with their forwards to make any real attacks. CSI tallied seven corner kicks in the first half alone but were unable to capitalize on any of them.

The Dolphins are back in action on Tuesday, October 20 where they will take on William Paterson University at the CSI Soccer Complex at 4:00 pm.