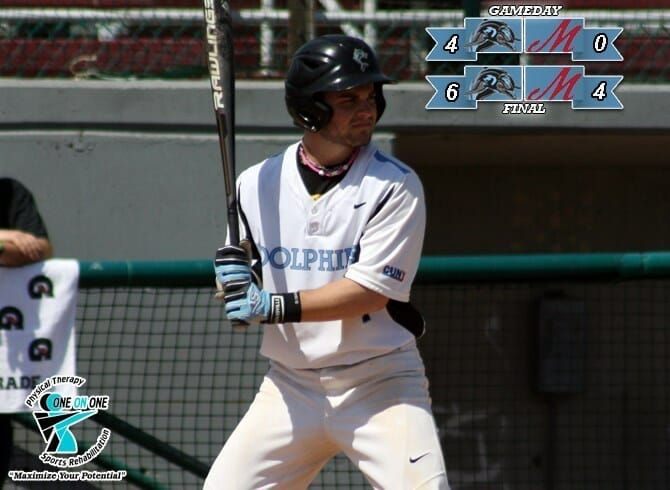 After a doubleheader split yesterday, the College of Staten Island baseball squad got a pair of big wins this afternoon against previously undefeated Muhlenberg College, scoring 4-0 and 6-4 wins as part of the Cal Ripken Division III Experience in Myrtle Beach, SC.  CSI lifted to 3-1 overall with the wins, while Muhlenberg moved to 5-2.

In the opener, CSI scattered 11 hits and held MC to just four, as pitcher Christian Capellan tossed the complete game shutout.  Capellan allowed just four hits and a single walk against three strikeouts, overcoming two errors in the field to complete the shutout.  Meanwhile, CSI was able to touch MC starter Troy Elias for a run in the first and second innings, adding single insurance markers in the fifth and sixth innings.

Frank Muzzio stroked and RBI-single in the first inning, scoring Nick Delprete, who recorded an RBI-single of his own one inning later.  Glenn Glennerster gave CSI a 3-0 lead in the fifth, when he singled home Muzzio and in the sixth, Joe Palmeri laced a sac fly to score Phil Ciprello.  Delprete and Muzzio would each finish with two hits for CSI.

In the second game, CSI used a big four-run first inning to set the tone in a 6-4 win.  Palmeri got things started with a two-RBI double that scored Delprete who walked and Frank Smith who had singled.  Then after a Glennerster walk, George Kantzian laced a double to right field to make it 4-0 against MC starter Sam Kasten, who would settle from there and pitch four innings.

Jason Failla got the start for CSI, but after a solid two innings, Failla was chased in the third when he allowed four runs.  From there, a pitcher’s duel broke out, as CSI reliever Peter Bellina went toe to toe with Kasten and then Ryan Banks.  CSI left the bases loaded in the fourth and another two runners on base in the seventh.  Meanwhile Bellina got himself out of trouble in the bottom of the seventh, inducing three straight outs after yielding a hit and an error to put two men on.

The game moved to an extra frame and CSI pounced.  Kantzian started with a single and then MC went to their bullpen.  After Kantzian was moved over, a costly error, plated Kantzian, and two batters later, Frank Sconzo scored on a hit by Smith, making it 6-4.  Despite giving up a base hit, Bellina was able to record a strikeout and induce two fly outs to end the game and complete the victory for CSI.  Smith finished the game 3-4 with an RBI, while Palmeri and Kantzian each tallied two hits.

CSI is back on the field tomorrow for a 12:30 doubleheader against Lancaster Bible College.