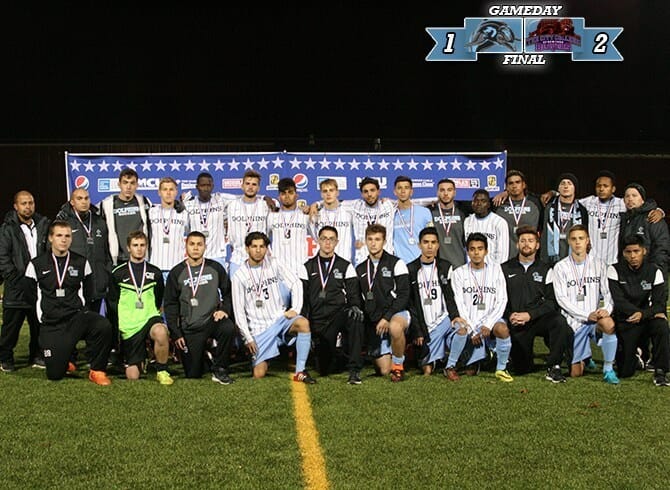 The College of Staten Island men’s soccer team played in the CUNYAC Finals tonight at Brooklyn College in Brooklyn, NY against City College of New York which was the seventh meeting between the two teams in the postseason. The Dolphins fought hard but were ultimately defeated in double overtime 2-1 in heartbreaking fashion. The loss ends the men’s season with a 10-9-1 overall record.

CUNYAC Rookie of the Year Brayan Evo nearly gave the Dolphins the lead in the first minute of the game when a blocked shot was laid up perfectly and Evo connected with a bicycle kick that went just wide of the post for the Dolphins’ best opportunity for the entire first half.

After that shot by Evo the Beavers came out strong in the first half of tonight game and were all over the Dolphins’ defense. They constantly poured on attack after attack and the Beavers were finally rewarded just seven minutes into the game when Anthony Scarallo used his long throw in which found the head of Syed Haider for the game’s first goal. Staten Island came out looked flat and the paid for it. The Dolphins were in the same situation earlier in the season when they played the Beavers as they surrendered an early goal before ultimately coming back and winning the game 2-1.

The Dolphins started to gain a little momentum towards the end of the half as the Beavers dropped back to protect their one goal lead which opened more space for the Dolphins to pass the ball and gain confidence. With their confidence growing they started to find more open space in a Beaver defense that has played like a brick wall throughout the postseason as they didn’t allow a goal until tonight. Emmanuel Agboola nearly tied the game up when he received a pass from Matthew Rocca, who was recently subbed into the game, but the shot went just wide of the post putting a scare into Maxwell Berkow.

Ruben Diaz who is the backbone for the defense made one of his runs forward and found the ball land at his foot from 30 yards out and didn’t hit it right and soared it over the goal with just 20 seconds remaining in the half. Had Diaz put that into the back of the net right before half time it definitely would have changed the half time talk given by Coach John Tardy and would have instilled some much needed confidence.
The Dolphins came out from the half and looked like a completely different team from the first half. They had energy and initiative and it paid off on a counter attack where Tarek Emam came streaking down the side line and found Agboola wide open at the top of the 18. Agboola calmly received the ball turned toward goal and curled one near post passed Berkow to knot the game up 1-1.
Momentum was clearly in favor of the Dolphins at this point but they were unable to build on that momentum and crack through the Beavers’ dam again. Set pieces proved troublesome for the Dolphins all game as the long throw ins kept finding their way onto an attacking players head but they all luckily were saved or cleared out of the box.

The inability to cover players on set pieces would come back to bite the Dolphins in the second overtime as Mostafa Haridi was left unmarked in front of the goal and headed it home for the game winning goal against the Dolphins.

The Dolphins players were left in shock as CCNY started to celebrate. After playing so hard for 103 minutes and fighting through injuries all season the players were left devastated as they felt this was their year.

CCNY is the Dolphins’ postseason kryptonite as they have faced each other seven times and the Dolphins have never beaten the Beavers in the Postseason.