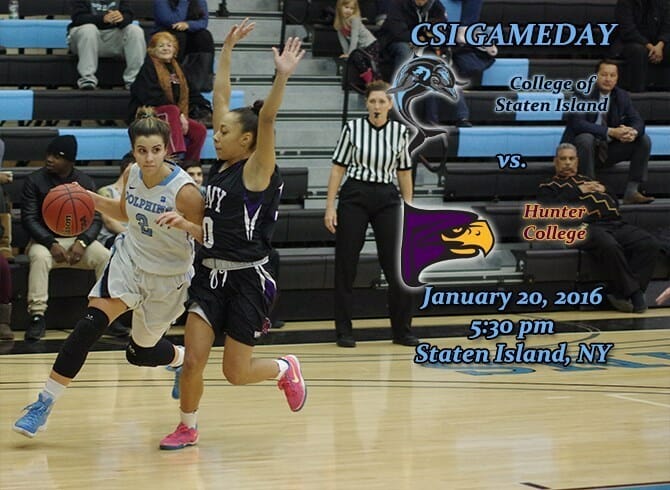 The College of Staten Island women’s basketball team has put together two wins in a row against CUNYAC opponents and will hope to make it three tonight when they take on Hunter College at 5:30 pm. The women are currently sitting in second place in the CUNYAC with a 6-2 record.

CSI vs. HUNTER COLLEGE AT-A-GLANCE
Matchup: CSI (10-6 overall, 6-2 CUNYAC) vs. Hunter College (6-10 Overall, 3-5 CUNYAC)
Where:  CSI Sports & Rec Center – 2800 Victory Blvd., Staten Island, NY
Tip-Off:  5:30pm
Ticket Info: $5 General Admission / Free – CSI Students, Faculty, Staff
Live Video:  http://www.csidolphins.com/CSISportsNet
Promotional Info:  One person will be chosen at random to shoot a half-court shot worth $5,000
All-Time Series: Hunter leads 37-28
Last Year’s Result: CSI won both meetings
Players To Watch (CSI):  Christina Pasaturo most recently poured in a season high 26 points against Medgar Evers, just three points shy of her career high 29 points.  Samantha Flecker also had a big game against the Cougars and dropped 20 of her own.  These two players have been the Dolphins’ most efficient scoring options this season and they will look to continue that tonight against the Hawks.
Players To Watch (HC): Widly Couloute is the scoring threat for the Hawks as she averages 13.8 points per game and had a 12-point 12-rebound outing the last time these two teams met.
Notes: The Dolphins have won five of the last seven meetings against the Hawks. When playing at the CSI Sports & Rec Center against Hunter the women are .500 with a 12-12 record.  When the women played Hunter College earlier in the year in New York, NY they walked away with an easy 16-point win over the Hawks.  The Hawks are one of three teams that the Dolphins have been able to hold to just five points in a quarter this season. Hunter College will come into tonight’s game on a three game losing skid.